Evolution of the Solar System

Evolution of the Solar System There are many theories about our solar system's creation but the most widely excepted idea is known as the nebular hypothesis. The nebular hypothesis was first presented to the astronomy community in the 18th century by Emanuel Swedenborg, Emmanuel Kant, and Pierre-Simon Laplace. Of course, because of recent developments and discoveries their hypothesis returned to the table and because of the unanswered questions involved, debit began as to its validity. But for now, this is the solar system's story and we're sticking to it.

In the book Evolution of the Solar System by Professors Hannes AlfvÃ©n and Gustav Arrhenius' provided by NASA (National Aeronautics Space Administration), they describe theorized five stages in the evolutionary process of a solar system. These five stages begin with formation of a sun and end with the death of a sun. It is clear that the sun is an important part of creating solar systems such as ours.

It is well-known that without the sun, there could be no life on Earth, but the sun also plays a major role formation of planetary systems as well. After the sun's creation, its gravitational field aids other planets in their formation as the dust and debris from the molecular cloud begins to compress together. So it is only fitting that the solar system begins and ends with the sun.

Stage One - Formation of the Sun 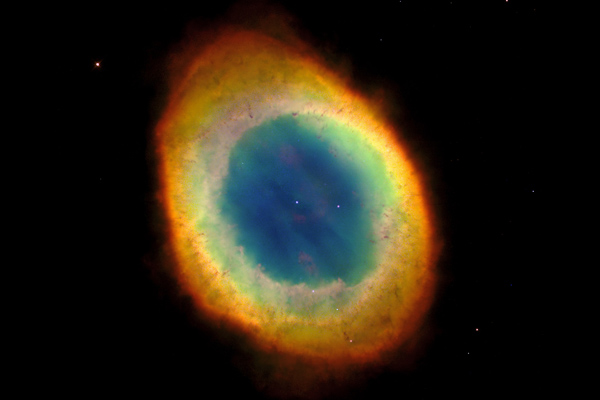 The Ring nebula, a nebula similar to what the Sun will become / hubblesite.org

Approximately 4 billion years ago, in the place where our solar system now resides, a thick molecular cloud filled with dust and debris spurred into action by an outside source, caused it to collapse in on itself and spin at an astronomical rate. The theory suggests that this molecular cloud actually existed for billions of years before this event occurred. Some have hypothesized this was the result of shock waves hitting the cloud from a nearby supernova, but in truth, the source is unknown.

The best way to describe this process is for you to envision a dense cloud placed into a galactic-sized centrifuge. As the centrifuge gains momentum, pressures within this cloud begin to increase and pull the larger part of its contents towards the center while the lesser portions of the cloud expand out flattening in the process. The increased pressures that pulled the dust and debris towards the center would be great enough to force these elements into a single mass spinning ball within its center. It is through this spin that its gravity field begins.

In the next stage of our solar systems evolution, this field of gravity aids other planetary bodies to form within the system along with their current rotation around the sun. At the core of this sun, a chemical reaction process occurs where the extreme pressure and temperature convert hydrogen atoms into molecules of helium. This "fusion" process basically combines 4 protons into a single "alpha" particle which releases as energy. The release of this energy creates the stellar winds pushing out hot air, filled with particles and metals, into the solar system.

Stage Two - Beginning Formation of the Planetary Ring and Its Occupants 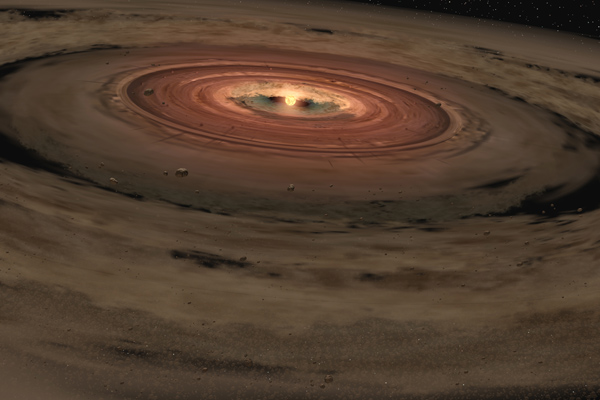 During the sun's formation, and then after, as the larger part of dust and debris gravitate towards the center the outer "arms" flatten out becoming the accretion disk. The accretion disk is basically the "nursery" for celestial objects as they are forming. It provides the womb for their creation along with the nutrients they need to form and grow. The remaining elements within the accretion disk compress together to form the other bodies of the solar system including the planets and moons that we know today.

The spin action of the cloud during the entire process is also the reason for the "spiral" appearance that our solar system has. This spin helps to create the orbit that they settle into along with creating their own rotation developing the gravity means to draw in more material for their formation and to capture other objects into their gravitational field as moons and satellites. During this stage, there is a lot of chaos occurring as large chunks of rock and debris collide into one another.

These large chunks of rock created from the small dust and particles from the cloud begin to mesh together forming even larger objects while the spin of the cloud helps to create a rotation in each object which draws more material towards them. 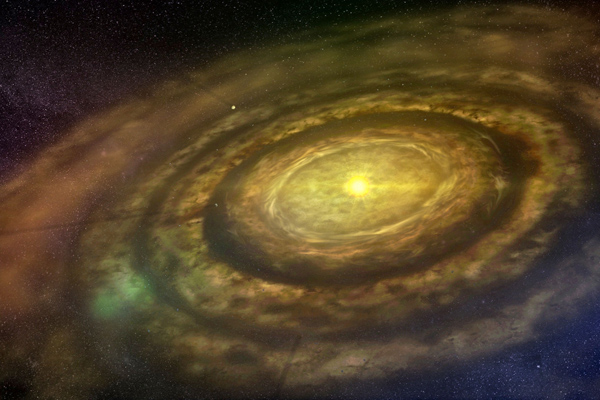 Formation of Planets in a Protoplanetary Disk / livescience.com

These forming objects (such as the planets themselves), find their orbital paths during this stage and many of these objects end up in the same path. These objects begin to collide with one another to either create one single larger mass with smaller debris pushed out or broken apart and scattered about the "ring". It is during this process that that Earth collided with another celestial object known as Theia.

With the right amount of pressure, two objects colliding would create a larger object with left over debris being jettisoned out to either meld together into moons and satellites (just as Earths moon) or out into the system either becoming planetary rings or asteroids. If the two objects were to collide violently they would only break apart, so the collision would be slow, with an impact equal to a dozen or so TNT's. Theory states that towards the end of this stage, life began on Earth. Organic material and other elements spurring life into existence and the slowing of impacts allowed for that life to flourish. 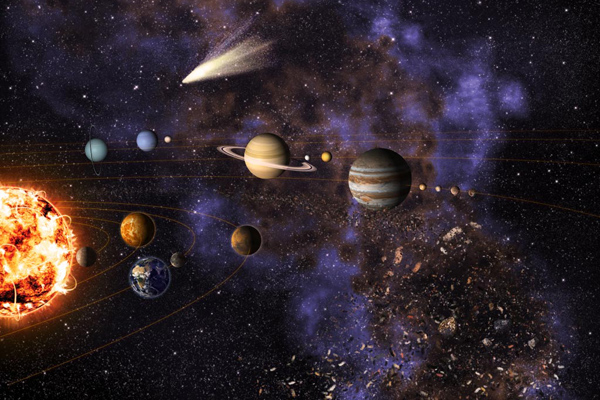 This is the stage we are in where everything slows down but does not stop. The cloud that is now the accretion disk is still in a slight spin but has slowed considerably. All large bodies fully formed now have a defined orbital path around the sun and their own rotation, their gravitational field playing tug of war with the suns keeping them in their line. However, formation is not completely over yet. Smaller body objects randomly get caught in tidal forces that remove them from their station. These objects can get caught in the gravitational pull of other objects and either get pulled into those objects or get caught in an orbital path around that object. We may experience meteor showers, asteroid impacts, or (like in 1994 with Shoemaker-Levy 9) comet collisions but chance of any astronomical collisions are not very likely.

Many impact zones from the distant past show that there was still a lot of activity during the early part of this stage. One such impact on Earth may have been the end of the dinosaurs. In the past few thousand years, however, there has not been an impact from any large objects such as asteroids, meteors, or comets. What objects have entered our atmosphere were too small and disintegrated before landfall.

The objects that come near Earth typically do not come within a few million miles or wind up captured by other larger bodied planets around us such as Jupiter. That is not to say that a large object will not collide with Earth in the near or distant future, but overall it is a fairly quiet time in the life cycle of our solar system. But in about 5 billion years, that will all change.

Stage Five - The End is Near 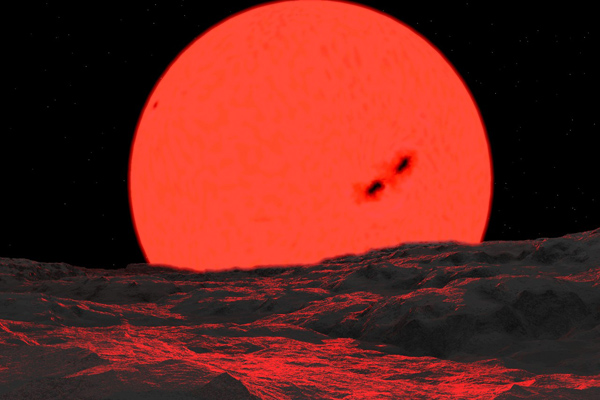 Stage five is the declining years. Our solar system has another 5 billion or so years before this will happen. The sun will have started to burn itself out at about that time and transformed into a different planetary object. As it cools it will begin to expand engulfing any nearby planets or objects becoming a red giant. A red giant still has much of its radioactive heat but the thermal fusion has or is beginning to end. Many of the large objects in our solar system that are not engulfed during that process find themselves displaced from their orbits during this stage.

This could cause a bit of chaos as planets lose their orbital path and collide into one another or sent off into the unknown and our solar system will no longer exist. The sun, however, will remain but as it "dies" it will become what is known as a white dwarf. A white dwarf is basically a sun that no longer has thermal fusion occurring at its core and has lost all its radioactive heat causing it to turn white. A white dwarf has the density of a sun but its mass is closer to that of Earth. As stated before, there are still many questions unanswered within this theory that continues to keep this explanation on the table. However, as this is the best plausible explanation based on what little information we have to date, it is the theory that is most widely excepted.

Further, studies of planetary systems on the outer edges of our solar system, particularly those in the Oort Cloud and Kuiper Belt, will help us to further understand how our solar system came to exist and prove whether this hypothesis is correct or not.