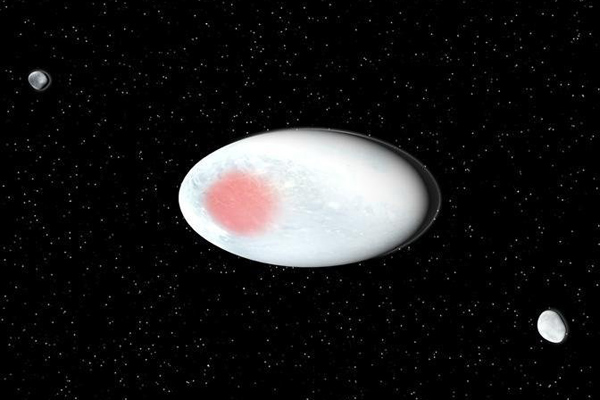 Concept of Haumea and its two moons (Hi'iaka and Namaka) / cgsociety.org

Currently, there have only been two moons that have been discovered in orbit around Haumea (Namaka and Hi'iaka). At this time, we do not have much information on these two moons other than they appear to be similar in shape and design as Haumea, only much dimmer and smaller in size. 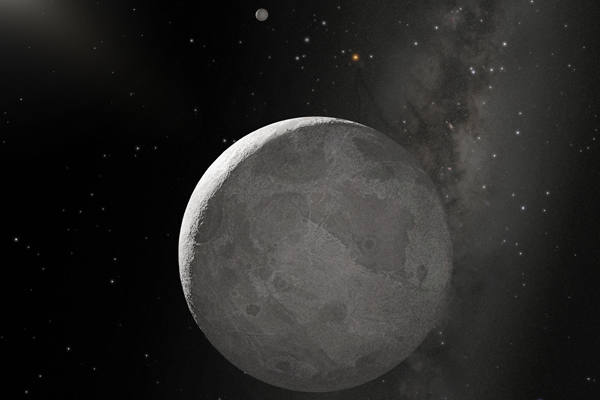 Concept of Eris and its moon Dysnomia / hubblesite.org

Eris currently has only a single moon, Dysnomia, and other than speculations little else is known about this moon.

A provisional moon is a discovered object in orbit around a parent object. These moons have not been named as of yet and are given a temporary (provisional) name for identifications purposes. The names are designated as S (satellite)/year discovered first initial of parent object discovery number. For instance S/2003 J12 was a satellite/discovered in 2003 orbiting Jupiter and was the 12 "moon" to be discovered in Jupiter's orbit. These are the provisional moons that are currently known in our solar system. There is little information usually available for these moons because their discovery is still fairly recent.

S/2003 J 12 — sitting at approximately 17.8 million km (12.2 million miles) from Jupiter, S/2003 J12 was discovered between February and March of 2003. It was discovered while observations of Jupiter's moons revealed more moons in its orbit.

S/2009 S 1 — little is known about this moon as it was just discovered in a photograph in 2009 taken by the Cassini probe. Discovered by it's "shadow" in Saturn's B-ring, it is believed to be no more than 300 meters (980 feet) in size, too small to be seen other then by it's "propeller" hence it is called a "propeller" moon.

S/2010 J 2 — was discovered in 2010 and has an orbital path that takes 1.7 years. It has an average distance from Jupiter of 21 million km (13.1 million miles). It is approximately 1 km (.62 miles) and has been labeled as the smallest moon in the solar system found from Earth.

S/2011 J 1 — founded by Scott Shepard in 2011, no information is available at this time for this Jupiter moon.

S/2011 J 2 — founded by Scott Shepard in 2011, no information is available at this time for this Jupiter moon.

S/2004 N 1 — was discovered in 2013. It is approximately 11 miles (18 km) in size and orbits Neptune in just under a day. The moon is so dim, the Voyager 2 did not pick it up in 1989 but the SETI Institutes Mark Showalter noticed this tiny moon in photographs he pulled from the archives. When giving the moon a designation, they chose to use the year it was recorded rather than when it was actually noticed which is why it has the year 2004 instead of 2013.

See also: All satellites and moons