Large scale structure of light distribution in the Universe / flickr.com

Universe — is a vast vacuum packed expanse filled with a collection of gases, galaxies, stars, and planets. Little is truly known about the universe but it is believed it was created through an explosion that occurred billions of years ago called the Big Bang, that it is currently 10 million light years (the distance light travels in one year 9.4607 × 1012) in size, and that it is still expanding.

Milky Way — the galaxy in which our solar system is located is called the Milky Way. It was given its name due to its "milky" appearance and consist of trillions of stars and planets as well as many nebulae. It is believed to have been in existence for approximately 12 billion years, relatively young compared to the age of the universe itself, and is approximately 500,000 light years in size. 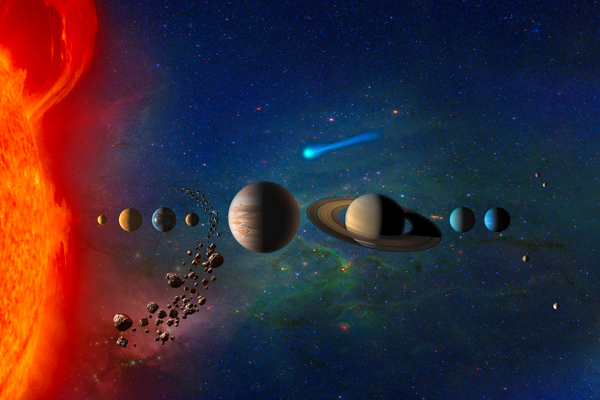 Solar System — a solar system typically consists of several planets, moons, and other large celestial objects that orbit in a gravitational line from a center, primary star within a galaxy. Each galaxy can consist of several solar systems and are differentiated by their primary star. Our solar system has been called by many names, Sol being the most popular. However, it is primarily known as the Solar System.

The Sun in February 2015 / wikimedia.org

Sun — is a large star typically at the center of a solar system that provides heat and light to the celestial objects that revolve around its gravitational pull. The sun is typically the largest celestial body within the solar system and is fueled by a thermonuclear reaction. Determined by its distance, a celestial body that is relatively within 93 million miles of a sun has the potential of sustaining life.

Our sun is typically called "Sol" and is the main source of heat and light for Earth. It's comprised primarily of helium and hydrogen but has traces of oxygen, carbon, neon, and iron as well. It is believed that the sun is currently middle aged but during its reclining phase it will turn from a "Yellow Giant" to a "Red Giant". During that time, its size will expand possibly encompassing all the planets in its path, including Earth, but would not occur for another 5 billion years.