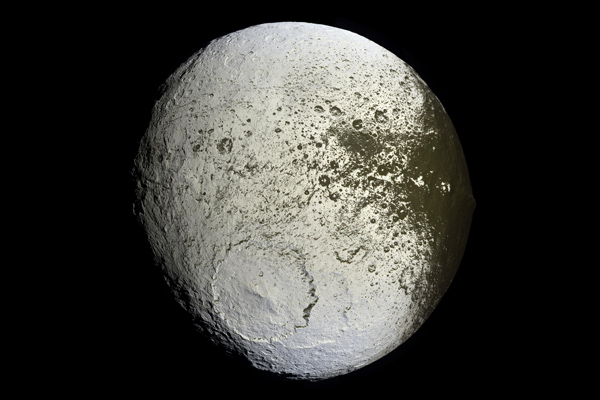 Of all of Saturn's moons, in fact of all the moons in our solar system, Iapetus is probably the most unusual moon. It has two distinctive features that have both baffled and fascinated astronomers since its discovery in 1671. Only fairly recently have we begun to understand the oddity of the third largest of Saturn's moons.

Iapetus was discovered in 1671 by Giovanni Cassini. He was baffled when first viewing the moon because he was able to see the moon when it was on the Eastern side but once it entered the Western side, it completely disappeared. After several modifications to his telescope to increase the magnification, Cassini finally discovered the reasoning behind this dilemma. Iapetus' trailing side was dark asphalt, while its leading side was light as snow. 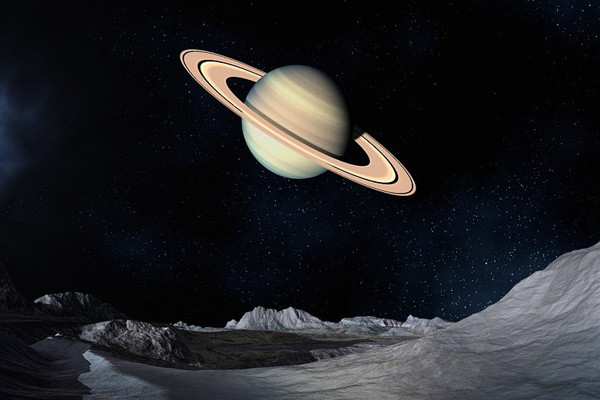 Iapetus is approximately 13,561,300 km (2,213,000 miles) from Saturn, taking up to 79 days to complete its rotation around Saturn at an orbital inclination of 15°, so basically its orbit is a bit tilted around Saturn which gives you a great view of Saturns rings. It is tidally locked to Saturn so only one side of Iapetus is visible from Saturns surface at all times. Because of its extreme orbital distance from Saturn, it receives very little of its heat from tidal heating and only its trailing side receives heat from the sun.

Iapetus' shape leads scientist to believe that there is no fluidity within the moon's core. It is strongly believed that Iapetus is essentially a dead planet with a frozen solid internal structure with a small amount of rocky material, less than 1/4 its mass. No other information on the internal structure of this moon has been presented. 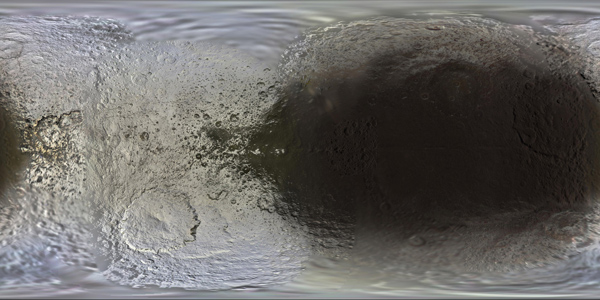 Aside from its awkward shape, Iapetus contains two distinct features on its surface which make it stand out. Along its equator, encircling approximately 75% of the moon is a large mountain ridge which gives the moon its famous walnut appearance. Iapetus has the tallest mountains in the solar system so far reaching about 1,300 km (807 miles) long, 20 km (12.4 miles) wide, and 13 km (8.7 miles) high.

The reasoning behind this ridge has baffled scientist since it was first imaged by the Cassini probe in 2007 and many theories have been suggested. One such theory suggests that Iapetus may have had its own moon, as the moon was torn apart, material from that moon settled and compacted onto the surface of Iapetus to become its ridge. 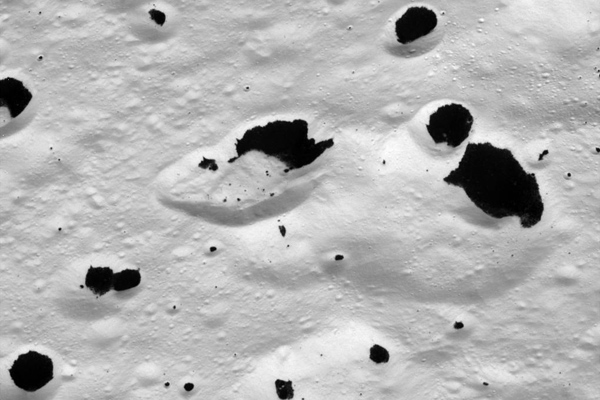 Another suggestion was that subsurface material was forced upward and frozen during the early stages of its development. One interesting fact about the ridge is that it contains mostly on the darker side of the planet. On the brighter side, it is mostly isolated 10 km (6.2 miles) high peaks. Impact craters on the moon are concentrated more so around this ridge than the rest of the surface, the largest of these is Turgis at 580 km (360 miles).

Iapetus' 1,471.2 km (914 miles) in diameter stretch is two-sided, on the trailing side, it is covered in a dark material which makes it difficult to see. On the leading side, it is as bright as snow. It was only fairly recent when scientist discovered that the culprit to this is Saturn's other moon Phoebe. Phoebe is a captured asteroid that is made up of a very dark material and is located just outside of Iapetus. 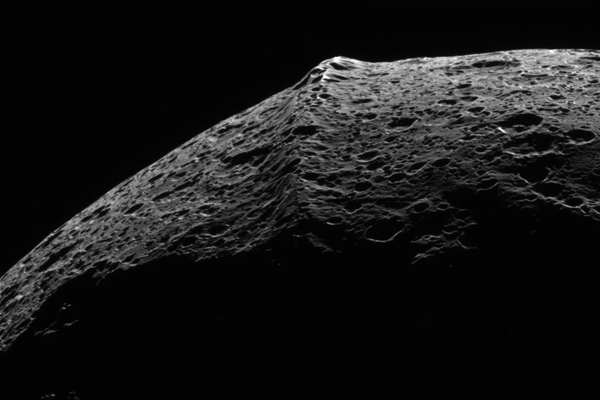 There is a very little detectable atmosphere on this moon and therefore no wind, clouds, or rain really exist. The sun's radiation and minor collisions kick the loose dust from its surface and creates a ring around Saturn which Iapetus tilted orbit crosses through. As it moves through this ring, Its trailing side is exposed to the dark material which settles down onto the surface. Because Iapetus is tidally locked to Saturn, only one side sees the sun at all times. The black material being a heat conduit reaches temperatures of -143°C (-226°F) which turns all frozen matter into gas on the planet.

Its slow rotation and a small amount of gravity allow for the water-ice to migrate over to the leading side facing Saturn where temperatures are approximate -173°C (-280°F). This causes it to turn back into a solid icy form that settles onto the surface on the most reflective side of the planet. Small traces of the dark material also settles on the light side which is what gives it a slight splotchy look. 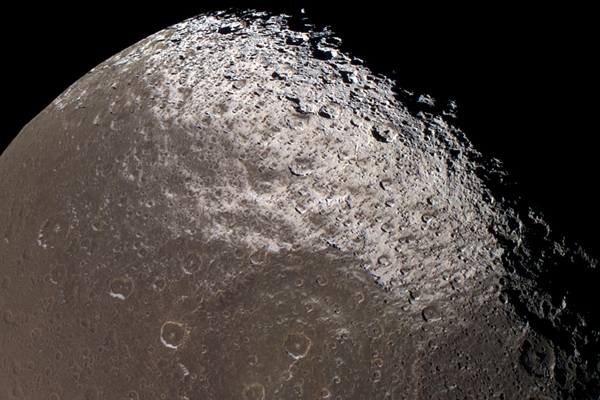 No real major observations of Iapetus have been made except through flybys and Earthbound telescopes. Voyager 1 and Voyager 2 both flew past Saturn and took images of it and its moons along with minor data collection on the moons. This was done during the 1980's as they moved past Saturn towards the outer reaches of our solar system. The Cassini-Huygens mission is a probe that was sent to orbit Saturn back in 2004 and is currently still in orbit. Although its main focus is Saturn and Titan, it frequently sends back images and data on Saturn's other moons as well. Currently, there are no future plans or proposals for missions to Iapetus.