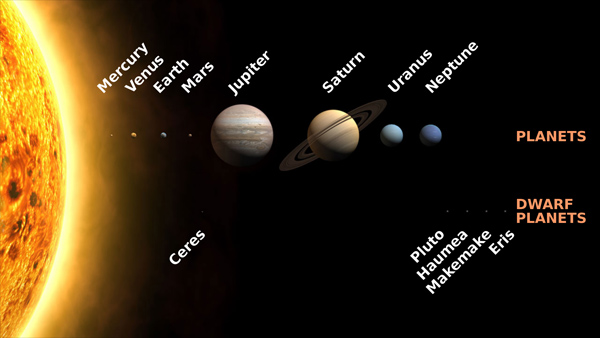 Planets and dwarf planets of the solar system with sizes shown to scale / wikimedia.org

What constitutes as a planet? This was the question on the minds of astronomers around the world as the International Astronomical Union gathered in Prague, Czech Republic in 2006. With the discovery of 100's more objects in the Kuiper Belt and the discovery of Ceres in the asteroid belt, there needed to be more specifics as to what constituted as a planet. That is where the classification rules began and the creation of the sub-classification of Dwarf Planet was born.

To qualify as a planet, an object is required to follow three basic principles. It must orbit a sun, not another object. Two, it must have the mass to be able to assume hydrostatic equilibrium, basically, it has to be "round". And three, it has to have cleared its "neighborhood". The sub-classification of dwarf planets are objects that follow all these criteria except the third. There are hundreds of planetary objects that follow all but the third criteria. Most of these reside in the Kuiper Belt with the exception of one which is Ceres in our asteroid belt. 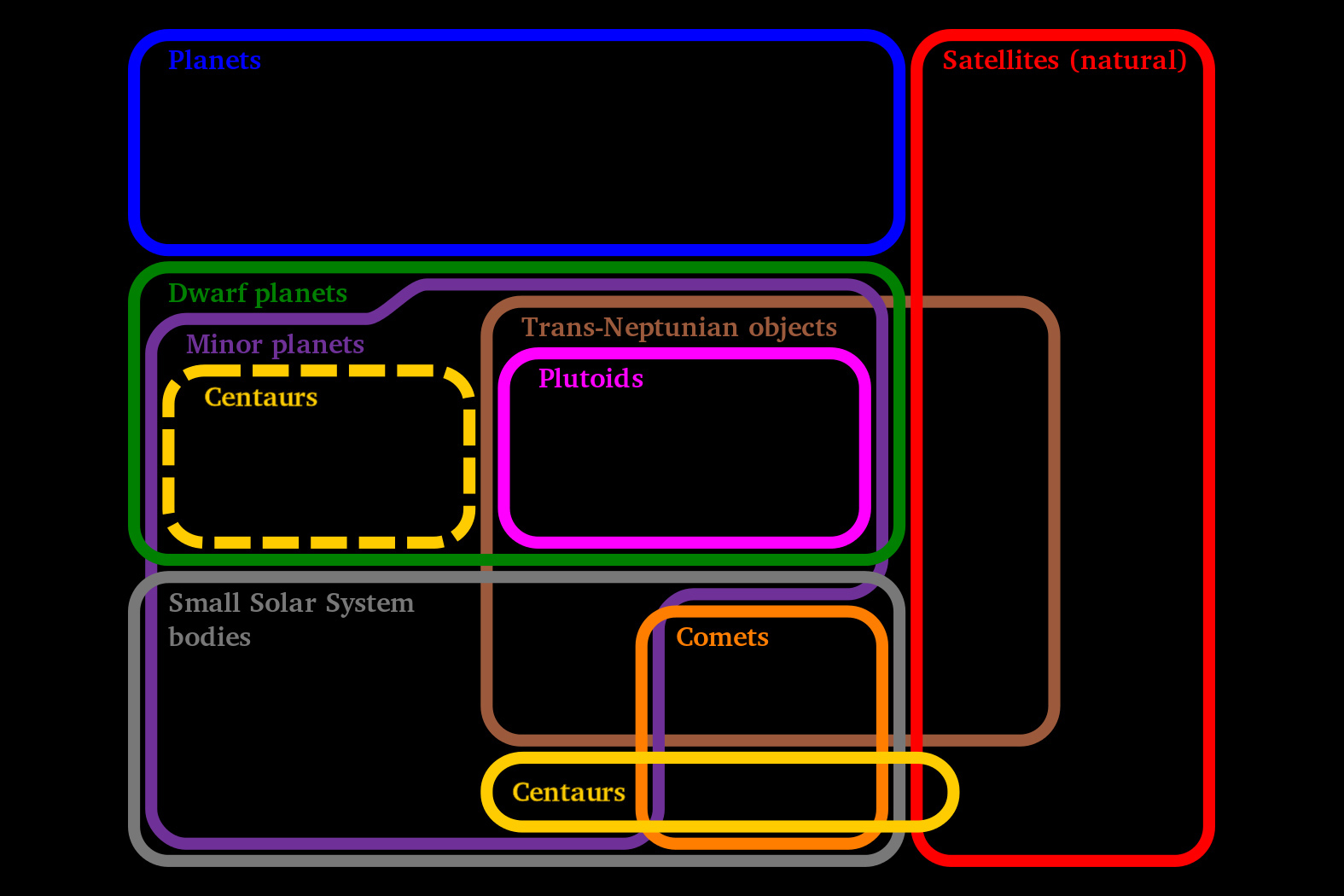 This new classification idea was intended to aid astronomers for future classification purposes as they are finding more and more planetary objects within the Kuiper Belt. Hundred's of objects within this area of our system, stretching out past Neptune to the very edge of the solar system, have been discovered in recent years which gave question to what constituted as a planet. Ceres, within our asteroid belt, was one of the first planetary objects to bring this question to light. The discovery of Eris, Sedna, Makemake, Haumea, and many others made it an issue worth mentioning at the conference.

This does not mean the Pluto and the other "dwarf" planets will remain as such in the future. As this classification is not really precise. It may be that the objects within their orbit just have yet to be absorbed land that in time these planets may still clear their space. Then they would constitute as a planet. The discovery of more objects both inside and outside our solar system could change the classification rules altogether in the future. Who is to say what will happen years from now, but for now it is yet another attempt at mankind to simplify a complex system as we try to understand the universe around us.

Ceres — upon its first discovery in January of 1801 it was believed to be a comet then it was determined to be the missing planet between Mars and Jupiter. However, it is nested in a asteroid belt (the largest in our solar system) and so it was reclassified to be an asteroid. It is now considered as a "dwarf" planet but is still labeled as an asteroid, because in reality like Pluto, they have no idea how to truly classify this mysterious object. 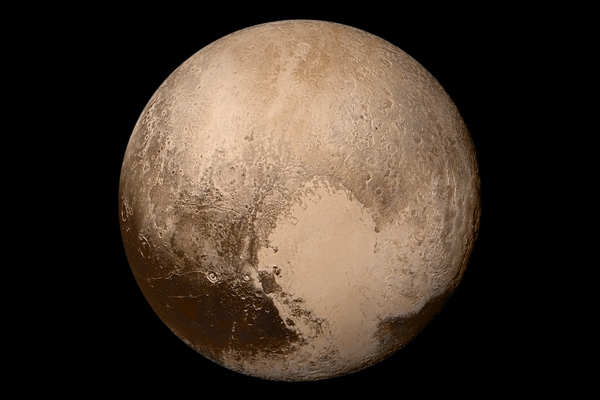 Pluto — at one time known as the 9th planet in our solar system, due to the new astronomy rules Pluto is no longer considered a planet but is now a "dwarf" planet. Located beyond Neptune in the Kuiper Belt (ring of bodies past Neptune), Pluto is smaller then our own moon and reaches temperatures of -387°F (-233°C). 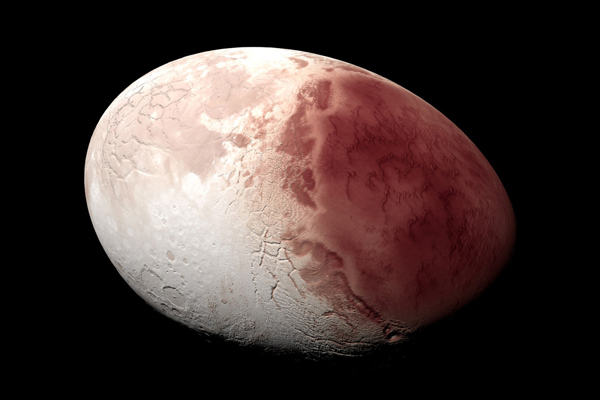 Haumea — because of it's distance, little is truly known about Haumea other then its odd elongated shape and it is roughly the same size as Pluto. It's orbit path around the sun takes 285 Earth years and it is make of rock with a icy coating over the surface. This coating causes the dwarf planet to appear bright similar to the effect of sunlight on snow on Earth. 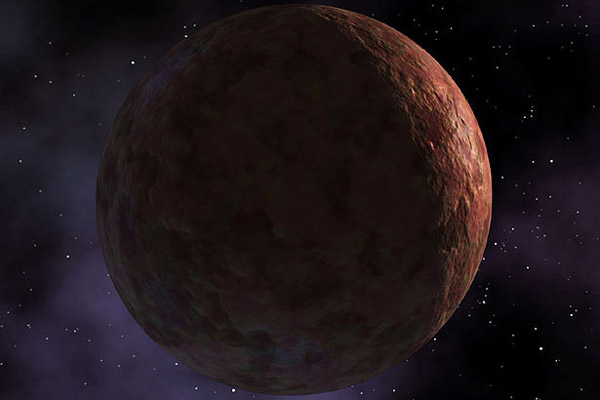 Makemake — is a recently discovered, March of 2005, dwarf planet located in the Kuiper Belt. Slightly smaller then Pluto, Makemake's surface consist of primarily frozen nitrogen, ethane, and methane. Makemake's orbital path around the sun is approximately 310 Earth years and it, along with Eris, is responsible for the new classifications of what constitutes as a planet. 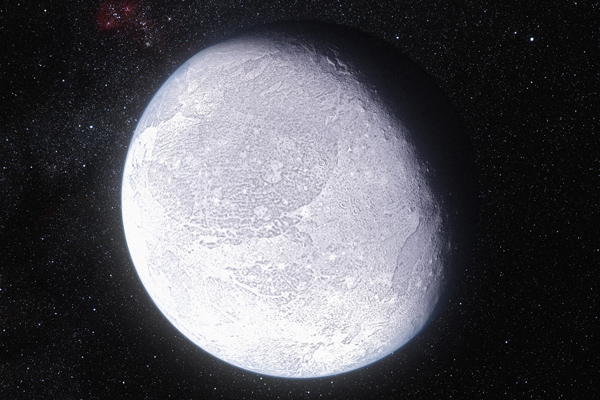 Eris — the next "dwarf" planet with in the Kuiper Belt is Eris and has the most extreme orbital path that extends well outside of our solar system. It is believed that its surface temperatures vary's from -359°F (-217°C) to -405°F (-243°C). It's surface is covered in ice but as it comes closer to the sun and the ice melts, it's surface is closely similar to Pluto's.