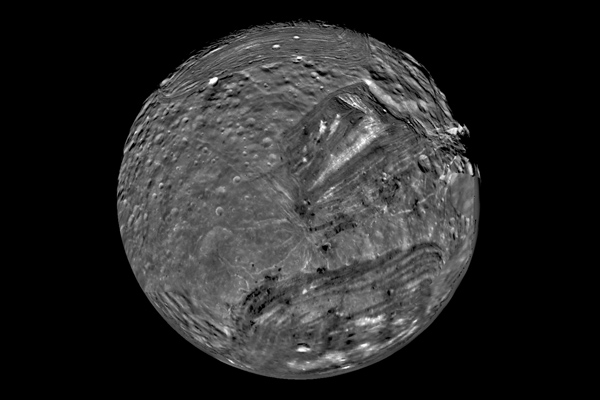 Miranda — is one of the most "scarred" up satellites in the solar system. This leads scientist to believe that there was much geological activity in Miranda's early years. Revolving around Uranus, it is the closest to the parent planet and it's rotational period is "synchronized" with Uranus's. So when standing on the surface, you would see the same face of the satellite at all times, much like our moon. 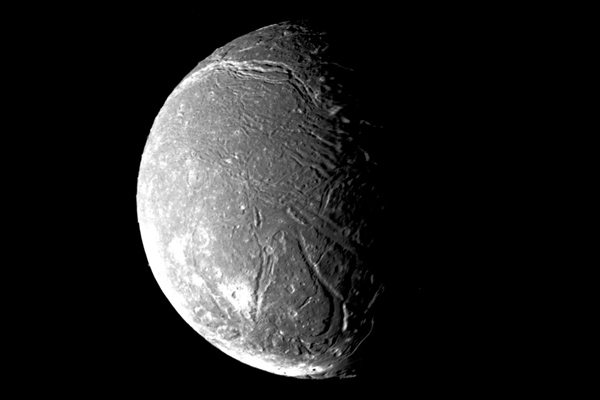 Ariel — is believed to have a porous surface due to its extreme rise and fall in temperature as it comes and goes out of the sunlight. Other then water, the only other element that has been detected by the infrared spectroscopy of the planet has been carbon dioxide. This element seems to be in heavier concentration on Ariel's trailing side more so then its leading. It is not completely known what the CO2's origin is at this time. 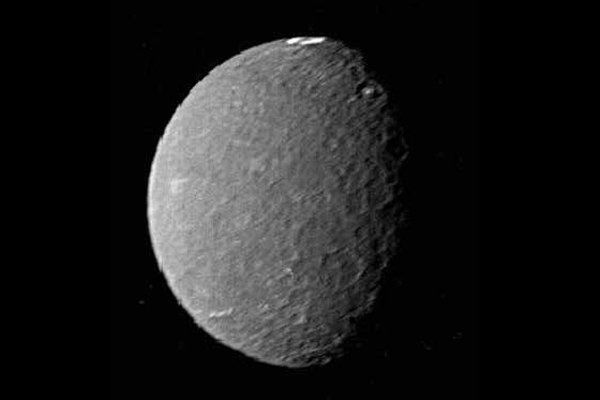 Umbriel — like Uranus's other moons and satellites, Umbriel's surface consist primarily of ice and rock with concentrations of carbon dioxide found on its trailing side. It is also the most riddled with impact craters out of Uranus's satellites and moons next to Oberon. The Northern and Southern poles spend 42 years in complete darkness and the satellite has a very low albedo making it very dark. It has yet to be determined why the satellite is so dark. 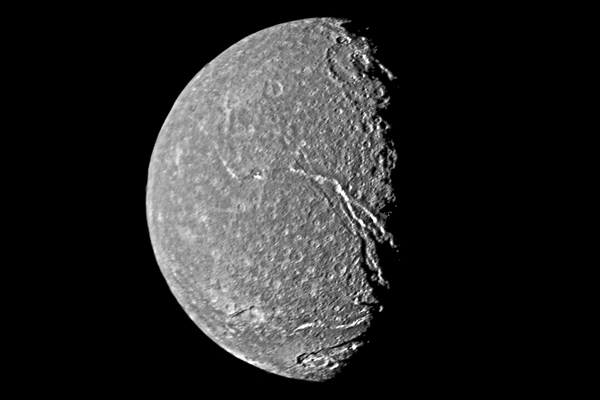 Titania — is the largest of Uranus's satellites and moons and the 8th largest in our solar system. This satellite has three distinct geological features: craters (deep impacts identified by an impression into the surface), chasmata (aka canyons), rupes (ake scarps, steep slope or long cliff). Carbon Dioxide appears to be present on the satellite but on September of 2001, observations showed that the satellite had no atmosphere or one that is so thin it is not detectable at this time. 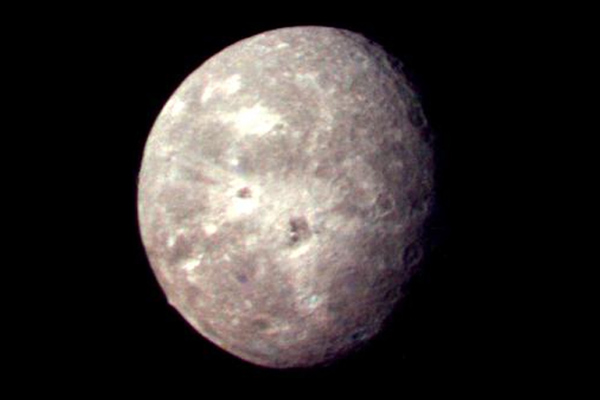 Oberon — unlike Titania, Oberon has only two distinct geological features - craters and chasmata. It is the 2nd largest "moon" of Uranus and the 2nd darkest. There are dark patches in its lead hemisphere and craters which scientist have yet to figure out what they are. The only images of this satellite were taken in 1982 by the Voyager 2 and no other missions have been planned in the future. 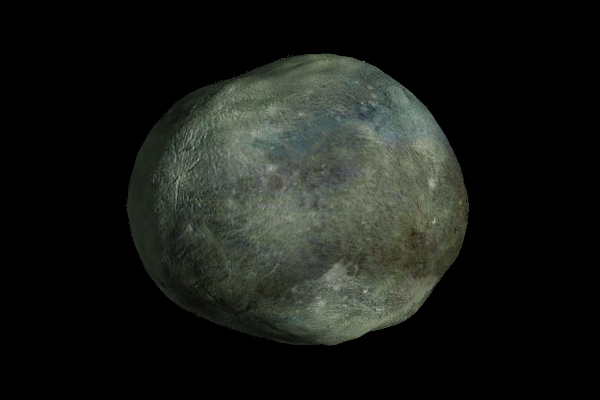 Portia Group — this is the only "group" in Uranus' moons. The Portia Group consist of Bianca, Cressida, Desdemona, Juliet, Portia, Rosalind, Cupid, Belinda and Perdita. Little is known about these moons other then they appear to be similar to C-class asteroids and possibly have a carbon-rich material on their surfaces. They orbit on the outer reaches or Uranus' gravitational pull.

Cordelia — is what they call a "shepherd moon". Cordelia moves along the inner edge Uranus' Epsilon ring "throwing out" or "throwing in" particles of this ring to keep the edge well defined. This moon is the closest to the planet and appears to be elongated in shape. Little is known of this moon at this time.

Ophelia — is Uranus' other "shepherd moon". Ophelia is located on the outer edge of the Epsilon ring keeping the edge of the ring well defined and from dispersing completely into space. It is believed that it is slowly decaying due to tidal forces and may cease to exist in time.

Mab — is one of Uranus' inner moons that orbits near the Mu ring and may provide the "dust" for the ring. Because it is a very dark moon, at first it was not noticed in the images from the Voyager 2 flyby but upon discovering Perdita (a much darker moon), they reexamined the images and found Mab. 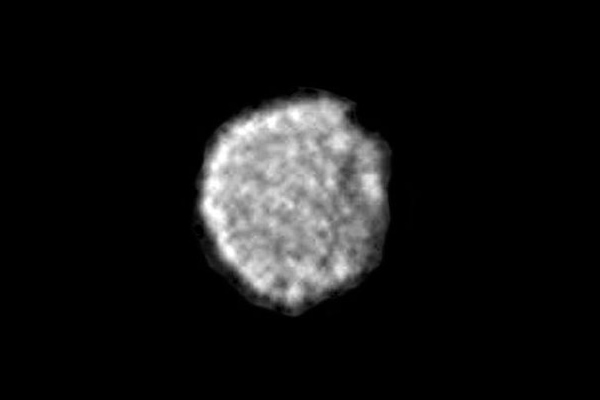 Puck — is almost spherical in shape but is only approximately 100 miles (162 km) in size making it a lesser moon. Its surface is covered with craters and is believed to be icy and orbits between Uranus' rings and it's satellite, Miranda. It has a very low albedo making it a very dark moon.

Francisco — has a retrograde orbit from Uranus' other moons as well as the planet itself. It was discovered in photos that were taken in 2001 in 2003. Little else is known.

Caliban — is also in a retrograde orbit like Francisco. It is believed to be 44 miles (72 km) in size and has an assumed albedo of .04 which is typical of an asteroid leading to the belief that it was an asteroid captured by Uranus' gravitational pull.

Stephano — another moon that is in a retrograde orbit, Stephano was discovered in 1999. It is believed that the small moon may have come from the same origin as Caliban due to their similar characteristics. However, like the other moons of Uranus, there is very little information available on this moon.

Trinculo — approximately 11 miles (18 km) in size, Trinculo inclination is about 167 degrees and it has an assumed albedo of .04. Its orbital period is 749 days around the planet but little else is known 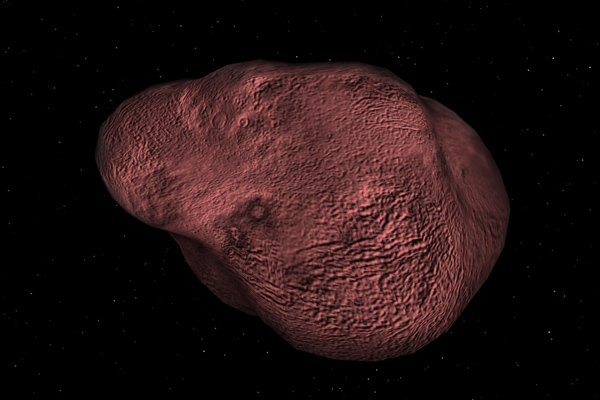 Sycorax — approximately 93 miles (150 km) in size, Sycorax rotation is estimated at 3.6 hours. It is believed that Sycorax was caught by Uranus' gravitational pull in passing and it may have a similar origin as Setebos and Prospero. It is Uranus' largest irregular moon. There is a suggestion that Prospero, Setebos, and Sycorax may have been from the same origin but their "colors" discount this idea as Setebos and Prospero appear gray, Sycorax appears as a light red.

Margaret — is the only irregular moon in Uranus' orbit that orbits prograde (same direction) as the planet and satellites do. It is approximately 12 miles (20 km) in size and has an inclination of about 57 degrees. Currently, Margaret has the most eccentric orbit of any moon in the solar system.

Prospero — is approximately 31 miles (50 km) in size and has an inclination of 152 degrees. Its albedo is assumed to be .04 at this time and infrared images show the moon as a neutral gray similar to Setebos. There is the suggestion that Prospero, Setebos, and Sycorax may have been from the same origin but their "colors" discount this idea as Setebos and Prospero appear gray, Sycorax appears as a light red. 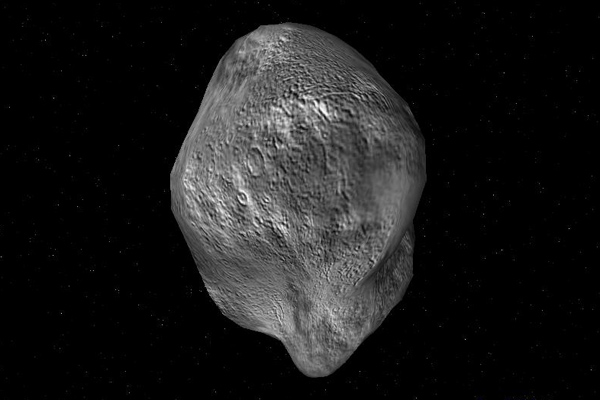 Setebos — not to be a mistake for Umbriel's crater Setibos, is approximately 29 miles (48 km) in size. It albedo is assumed to be .04 and it inclination of 158 degrees. There is a suggestion that Prospero, Setebos, and Sycorax may have been from the same origin but their "colors" discount this idea as Setebos and Prospero appear gray, Sycorax appears as a light red.

Ferdinand — is Uranus' outermost irregular moon and is approximately 12 miles (20 km) in size. It has an inclination of 170 degrees and an assumed albedo of .04. It was originally discovered in 2001 but disappeared then was rediscovered in 2002.