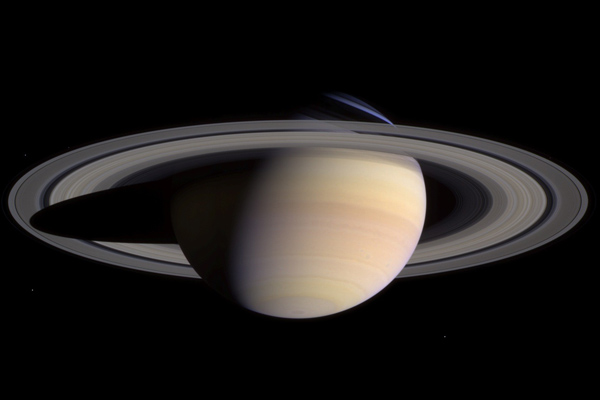 The 6th planet from the sun in our solar system is another gas giant and the second largest planet, Saturn. The oldest recorded discovery of Saturn dates back to the ancient Assyrians in 700 BCE, however, it is believed that it may have been known long before then.

At 750 times the size of Earth, surprisingly it is less dense than water. It is strongly believed that if Saturn were to be placed in water it would float. This may because the planet is nothing more than a ball of helium, hydrogen, and ammonia and lacks a solid surface area.

Position of Saturn in the Solar System / nasa.gov 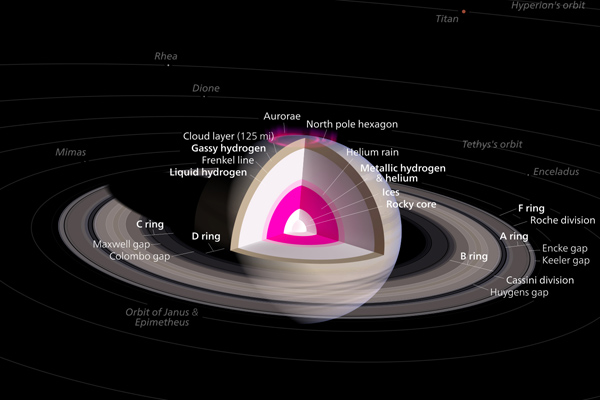 Saturn's interior is believed to be similar to Jupiter's in that it may have a core of iron, nickel and rock made up of silicon and oxygen compounds surrounded by a layer of metallic hydrogen and a liquid layer of hydrogen and helium combined. There would be no solid crust but a gaseous surface area that extends into its upper atmosphere made of helium and hydrogen. 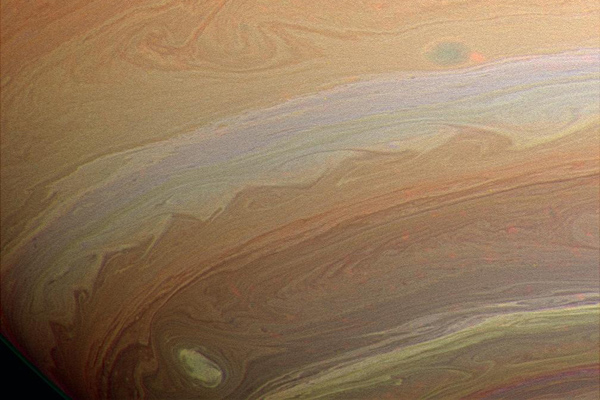 Saturn's atmosphere is made up of helium and hydrogen with the uppermost part of the atmosphere containing ammonia crystals. Violent storms with wind speeds over 160 kmh (100 mph) rage around the planet with lightning that is much more powerful than those seen on Earth.

One such storm which occurred in its south polar region covered a distance equal to 2/3 the size of Earth, that would be from New York to Baghdad. It had an eye similar to the hurricanes on Earth with definitive walls. This eye created a vortex or "hole" that allowed researchers to see further within the planet past the clouds than ever before.

As you descend into Saturn, the gravity is less than on Earth. A 68 kg (150 lbs) human would only weight 62 kg (137 lbs) on Saturn, but the pressure on the planet is so great, it would crush even a metal spacecraft within a few miles past the upper atmosphere.

The north pole of Saturn / nasa.gov

Within its North polar region is a perfect hexagon shape that could fit 4 Earths within and is 9.6 km (6 miles) deep. Scientist are still baffled as to what creates this phenomenon and what it actually is. The Cassini probe, which is in the neighborhood as we speak, will be observing this hexagonal shape so that scientist can get a better understanding of what it actually is.

Saturn has a total of 7 satellites, 46 moons, and 9 provisional moons that have yet to be fully identified that orbit the planet. Of these objects surrounding Saturn, the two most explored are the satellites Titan, which is believed to have all the makings to create and sustain life, and Enceladus, which has active geysers on the surface. For more information on Saturn's satellites and moons, please click here. 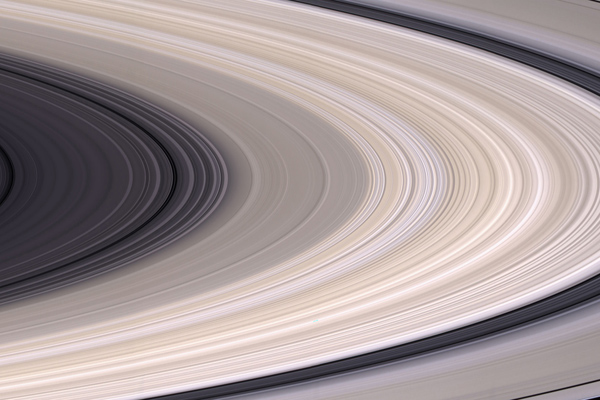 This freezing ball of gas is surrounded by 7 rings filled with icy debris that can range in size from like powdery snow to houses that continuously race around the planet at 32 to 48 thousand km (20-30 thousand miles) per hour. These 7 rings, named from A to G, cover an area of 278 thousand km (173 thousand miles), that is wider than 21 Earths sitting side by side and it would take 2 days in the fastest rocket ship to fly from one side to the other. However, they are no thicker then possibly 2 stories at only 65 feet in width. As the sun's light reaches the rings, because of their icy composition, the rings light up becoming visible called Ring Shine. The reflective nature of ice giving them their own light and they shimmer from the fast moving debris as they race around the planet.

Scientist believe these rings are fairly new as they are much too bright compared to the rings around other planets such as Neptune. Meaning that very little erosion has occurred, but over billions of years, those rings may cease to exist unless new material is added. It is believed that a large collision, either from past moons or from an outside object colliding with a past moon, is what created the rings. Debris from the masses would have been caught in Saturn's gravity and pulled into an orbit around the planet and turned into the rings we see today. Without more debris added to continue the rings, however, it is believed that in a few billion years these rings may cease to exist.

There have been a few missions to Saturn, most of which were concentrated on Saturn's moons as they are easier to observe. 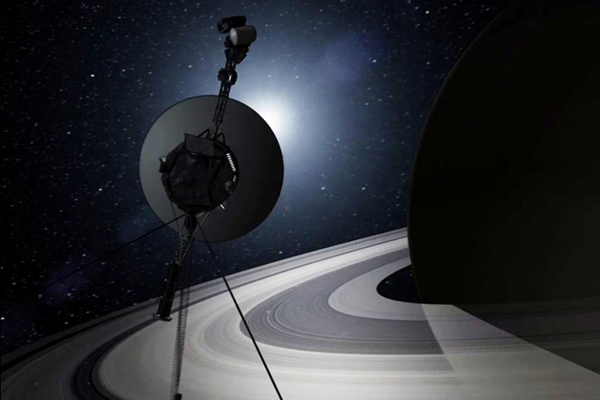 Voyager's 1 and 2 were the first probes to view Saturn. On a mission to explore the outer regions of our solar system, both probes did flybys of Saturn. Voyager 1 discovered that only 7% of the volume of Saturn's atmosphere is helium and the rest is made up of hydrogen.

Pioneer 1 discovered Saturn's "bow shock" which proved that Saturn had a magnetic field. It also discovered the F ring along with a 200 diameter moon. It was also able to detect the temperature of Saturn in its observations.

Cassini is currently viewing Saturn and it's moons, most especially Titan and Enceladus. It will remain in Saturn's neighborhood for the next four years and delivered the Huygens probe to Titan so that it could observe conditions on Titan after it discovered that Titan had rivers, lakes, seas, and rain on the surface of the planet. It also sent back data on hydrothermal activity from Enceladus, the first place outside of Earth that this has ever been seen.