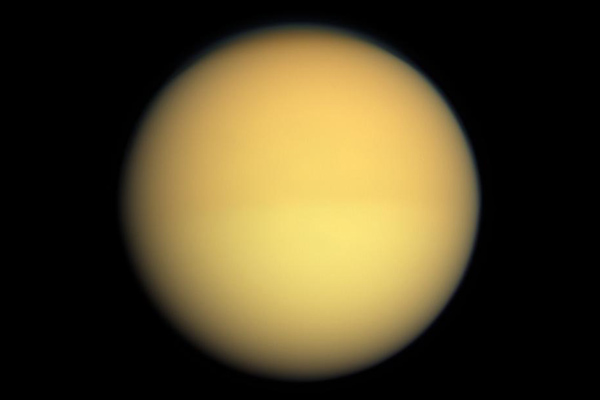 Titan is the 2nd largest moon in our solar system and is even larger than our smallest planet Mercury and even larger than the dwarf planet Pluto. For a full understanding of just how large Titan is, it is double the size of Earth's moon. It was the first moon to be discovered around Saturn, but it was not until 2004 that any real knowledge of this incredible moon was revealed. Deemed strongly capable of sustaining life, Titan has become a major topic of discussion in the world of Astronomy.

Titan was discovered by Christiaan Huygens in 1655. Titan's original name was Saturni Luna which is Latin for Saturn's Moon, after the discovery of Saturn's other moons by Frederick William Herschel, it gained the designation of Saturn II, IV, and VI. Given to the confusion of the changing designation, in 1789 the numbering scheme was frozen until 1847 when John Herschel (William Herschel's son) gave the suggestion of names for Saturn's moons in his publication Results of Astronomical Observations Made at the Cape of Good Hope. Thus Titan gained its name. 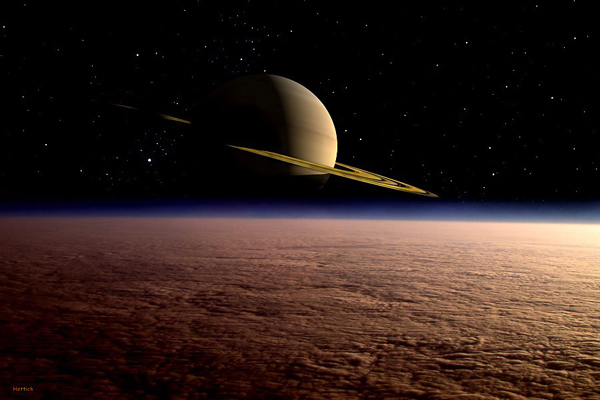 Titan's rotational period is about 15 days and 22 hours at an inclination of 0.348 degrees and is tidally locked to Saturn at a distance of approximately 7.5 million km (1.2 million miles). It is Saturn's largest moon and 6th ellipsoidal moon from the planet. 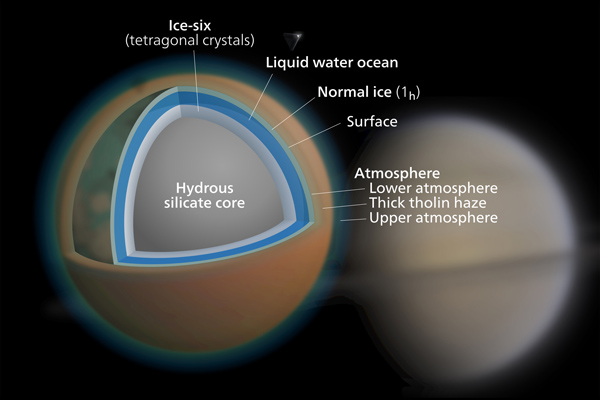 There is still much to learn about Titans internal structure but as of right now it is believed that it has a silicate rocky core covered by a water-ice shell. It has a global liquid ocean topped by a water-ice/clathrate shell just below the surface.

Titan's atmosphere is so dense that the only means of imaging its surface for the Cassini orbiter is through infrared instruments, radar altimetry, and SAR (synthetic aperture radar) imaging. Within these images, it has been determined that Titan has a very similar landscape as Earth with plains, valleys, deserts (dunes were imaged), and mountains.

The images show both rough and smooth areas throughout the moon's surface as well as temperature variations which indicate the possibility of liquid substances such as oceans, lakes, and streams existing that consist of liquefied methane. 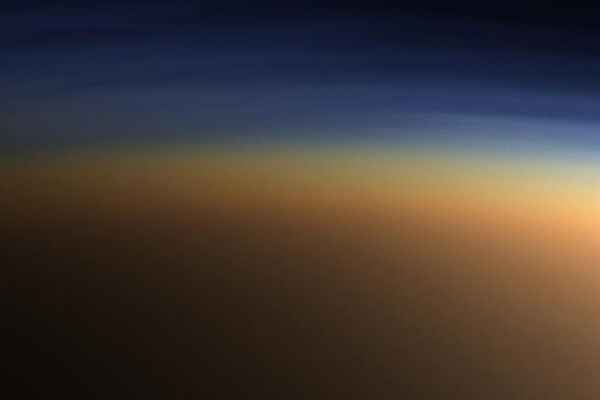 Because of its dense atmosphere, most of the heat/light that reach Titan is absorbed so only a small portion gets to the surface. As a result, surface temperatures are much lower than within the atmosphere at âˆ’179.2°C (-290.5°F).

One of Titans most interesting features is that it has an atmosphere that is nitrogen-rich just like Earths. The atmosphere, as observed by the Cassini probe, is much denser than the Earth's at 21.3 psi (pounds per square inch) whereas the Earth's is at 14.7 psi and it is much more massive at 1.19 times that of Earth's. 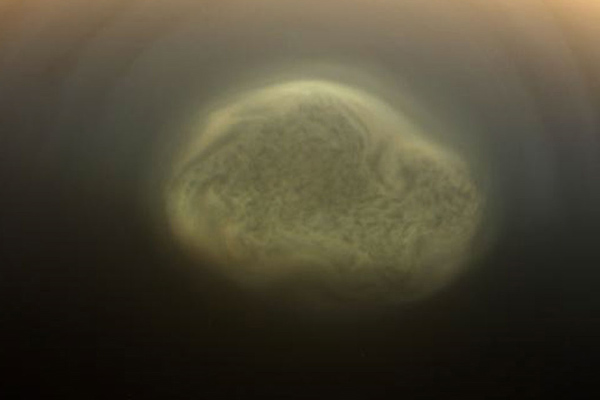 The larger portion (approximately 98%) of its atmosphere is composed of nitrogen but there are traces of methane, hydrogen, various other hydrocarbons, and interestingly enough propane has been detected as well. This chemical was thought to only exist on Earth but it appears that Titan adopted this idea somewhere along the way. It is believed that the methane in its atmosphere is being replenished from the interior of the moon through cryovolcanism. But not clear evidence has been seen of this as of yet.

Evidence has shown that it does rain on Titan and it is proposed that it contains methane. Clouds do form on Titan but they are primarily located in the polar regions and only cover approximately 1% of the moon, though it has covered as much as 8% on occasion.

Although two probes, Pioneer 11 and Voyager 1, both flew by Titan and sent information and images to Earth, it was the Cassini-Huygens spacecraft that opened the window to the further understanding of this mysterious world. In 2005, the lander Huygens exited the Cassini spacecraft and successfully landed on the surface of Titan. It sent back images of lakes and seas in the Northern region of the moon which prompted the idea of further exploration.

Several proposals for missions to Titan have been made over the years but funding was never acquired until 2015. In 2015, the Discovery Program put up the funding for a submersible to explore both Enceladus and Titan for either any sign of life or the possibility of habitability, This program is called Jet (Journey to Enceladus and Titan. No date has yet to be announced for the launch of this project but there have been submersibles designed and tested for this project.