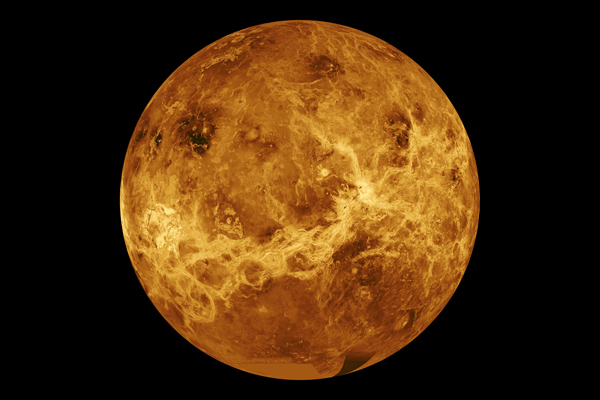 Venus has been observed in Earth's skies since the beginning of time. Being the brightest planet in our solar system due to its reflective nature and nearness to Earth, it was named after the Goddess of love and beauty by the Romans. It is the 6th largest planet in our solar system and is located at only 25 million miles (40 million km) from Earth. Similar in size, density, composition, and volume as Earth, it is often referred to as Earth's twin sister and thought to be similar to Earth in geology and environment. In 1962, the Mariner 2 probe showed us that Venus was in fact Earth's evil twin with a hostile environment unsuitable to sustain life. Where Earth is the Garden of Eden, Venus is the Bowels of Hell.

Position of Venus in the Solar System / nasa.gov

Venus is located 41.84 million km (67.24 million miles) from the sun. It orbits the sun every 225 Earth Days, but what is interesting is that its rotation on its axis is longer than its rotation around the sun at 243 Earth Days. So basically it takes 8 months for the sun to rise and set each day on Venus, which makes it very slow compared to Earth's but takes only 7 months to rotate around the sun. Venus' slow rotation on it's axis is the main reason it can not maintain a magnetic field to protect it from the solar winds from the sun.

Venus has a backward rotation on its axis compared to Earth's, making the sun rise in the West and set in the East whereas Earth's rises in the East and sets in the West. Scientist speculate this oddity may have been caused by a planet-sized object impacting with Venus in its early history reversing its rotation and slowing it down. In some ways, you can consider Venus as the negative to Earth's positive.

Venus' axial tilt is only just over 3° versus Earth's at 23°. This means that Venus' axial tilt is almost upside down. Earth's tilt on its axis is what gives it the seasonal changes during its rotation. Venus' tilt denies it this effect. Venus' orbital path is much more circular than that of Earth's, also. This denies it the ability to have "cool down" time by moving towards and away from the sun like Earth. Its orbit stays pretty constant through its rotation keeping it in close range to the sun's heat and light. So weather patterns and such stay pretty consistent daily and there is no "relief" through out the year for different areas of the planet. 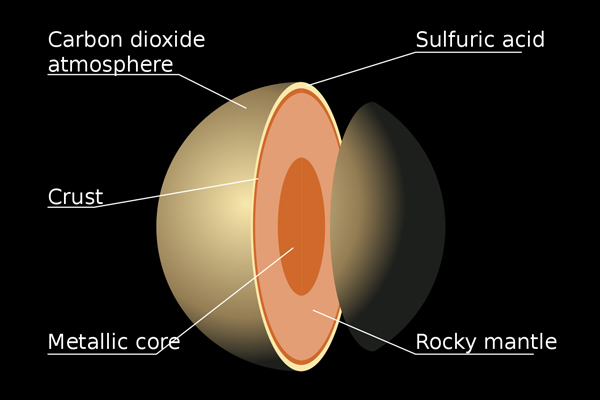 There is little known about Venus' internal structure. It is believed that because of its other similarities to Earth it may have a partially molten core, a rocky mantle, and a crust. However, this is all speculation at a this time because pressures on Venus has slowed the study of its surface and internal structure.

If you were to stand on the surface, if you could survive long enough that is, you will notice a major difference in the gravitational pull and pressure of the planet. A person who weighs 68 kg (150 lbs) on Earth would reduce in weight to a mere 26 kg (57 lbs) on Venus. The pressure on the planet is equivalent to diving 1000 meters down into the Earth's ocean, the human body only being able to withstand the pressures at approximately 500 meters. So even if you could survive the extreme constant temperature and hellish landscape, you would not be able to endure the pressures of this forsaken world. 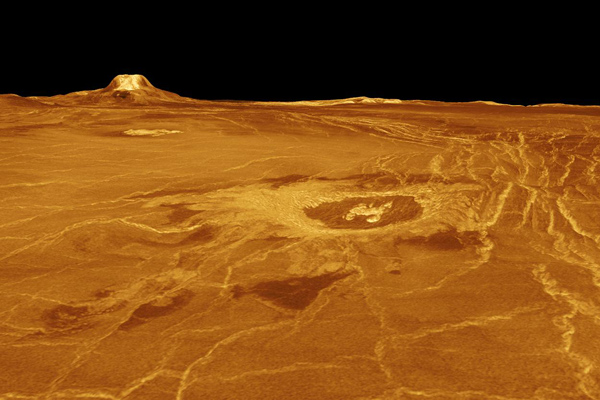 It is believed that at one time in Venus' earlier beginnings, it may have been on a similar path in development to Earth. Granite has been detected on the planet's surface indicating that at one point there may have been water on the surface. But because of the intense heat, what water there was had evaporated long ago. Leaving this planet completely devoid of moisture to cool the magma that spews onto the surface or to offset the CO2 that steadily collected within its atmosphere.

Although Venus is similar to Earth in many respects, its geology is very much different. Riddled with extremely active volcanoes, 167 of them alone are over 100 km (62 miles) across, the surface is covered in lava fields, hard jagged rocks, and virtually no water. This extreme terrain has another hazard which is also deadly to any form of life, intense heat. 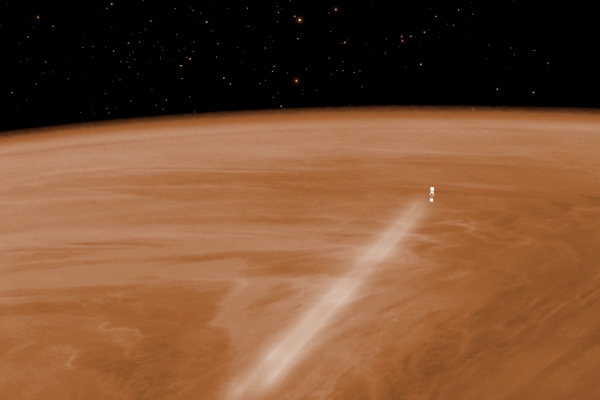 Visualisation of Venus Express during the aerobraking manoeuvre / esa.int

The planet surface is but a small part of the problem with Venus when it comes to the possibility for life to exist there. Venus' atmosphere is both poisonous and dense. Containing 96% carbon dioxide (CO2) and small traces of nitrogen, it is so dense that rainfall and lightening only occur in the upper atmosphere. Which could be a good thing seeing as how it rains sulfuric acid. Covered in clouds much like Earth, only comprised of sulfur dioxide, the density of these clouds work in three ways for the planet.

One, it does not allow for the sun's light to fully reach the surface and so the planet surface remains in constant shadow. A larger portion of the light from the sun reflects off of the clouds, which is why Venus appears so bright in the sky.

Two, along with the density of its atmosphere, it traps the heat on the surface preventing it from escaping. It traps it on the planet keeping temperatures high regardless of the time of day or year it is. Its poles are even the same temperature as the rest of the planet, which is a unique trait of Venus.

Three, it works similar to a magnetic field as Venus does not have one. Without this constant thick cloud cover and dense atmosphere, Venus would probably be much more like Mercury rather than Earth. Essentially a dead planet. 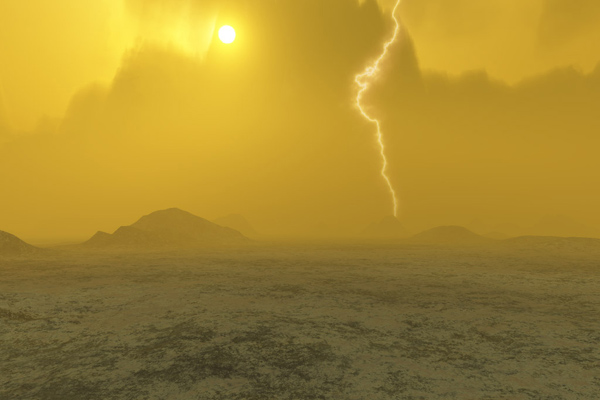 The reasoning behind the high levels of CO2 and the sulfuric acid clouds is behind what is on the surface which is littered with a large quantity of volcanoes. These volcanoes spew carbon dioxide and other gasses which Venus' original atmosphere collect. Over time, the build-up of these gasses with no means of counteracting them created a greenhouse effect that eventually killed all chances for Venus to develop life.

The surface temperatures on Venus reach a staggering 467°C (872°F) and because of greenhouse gasses, there is no way for the heat to escape the planet, so there is no temperature difference from day to night making Venus the hottest planet in the solar system.

Collectively, there have been 26 missions to Venus between the USSR and the USA. Because of pressures within the planet, most of those that were sent to land on its surface were either crushed or only able to send back minutes of data. One lander, Venera 14 sent by the USSR in 1981, successfully was able to land on the surface and send back both color and black and white panoramic images of the planets surface as well as soil analysis. Future missions to Venus have been projected but there are no definitive plans for these missions.

Sinister as Venus may appear, there is beauty and hope among the chaos of our sister planet. Today scientist are studying Venus extensively for many reasons, but most especially to gain a better understanding of what Earth's future may entail if greenhouse gasses are not controlled. Some scientist have even theorized that colonization of Venus may be more plausible than Mars because of its relative nearness to Earth, making travel much easier and less time consuming. However, all proposals thus far have been turned down. After all, who on Earth would want to move to hell?