The Sun, about a minute before sunset / wikimedia.org

The sun, aka Helios or Sol, is the largest mass in our solar system. It takes up 99.86% of the total mass of our entire system and the main source of heat and light. It consists of primarily hydrogen and helium, but it also has other elements such as oxygen, carbon, neon, and iron. During its creation, it became increasing hot and dense that it ignited through a process called thermonuclear fusion. This process is what creates the electromagnetic radiation that warms our planet and makes it possible for it to sustain life.

How it was created 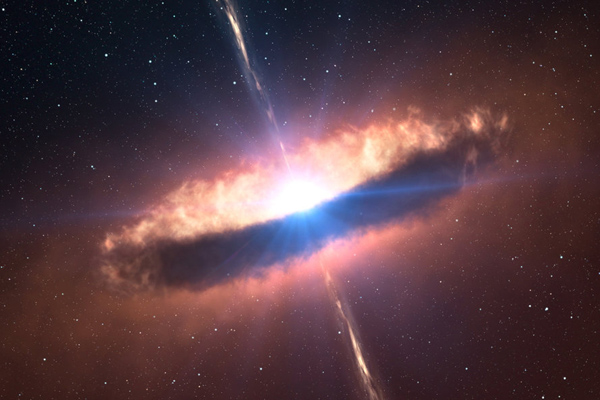 Birth of a Star / nytimes.com

During the beginning of our solar system, our system was but a dense molecular cloud within our galaxy. An event occurred, we are not certain what that event was, that spurred this cloud to collapse in on itself. As the cloud collapsed in on itself, the matter within this cloud began to fuse together growing into a single large mass. As this mass began to grow, it began to spin at an increasing rate, which developed a gravitational field around itself drawing in more material. Once it reached its full mass, a process called thermonuclear fusion occurred within its core turning it into a fiery ball in the center of our solar system. 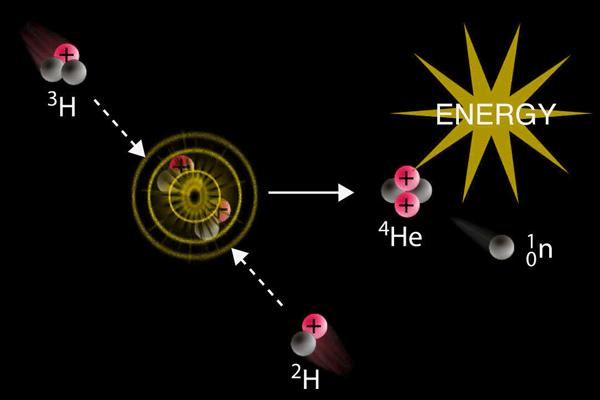 The process of thermonuclear fusion, which fuels our sun, is fairly simple. Two or more atomic nuclei at close proximity collide together at extreme speeds to create a single nucleus. This basically causes hydrogen to convert to helium 4 providing intense heat and light for the solar system. Scientists have tried to simulate this process, hence of the hydrogen bomb, in hopes of creating a new and safe energy source but are unable to find a way to control it. So for now, only the stars have the patent on this type of technology.

Structure of the Sun

As far as we know, the sun has no solid mass, but has four basic layers. 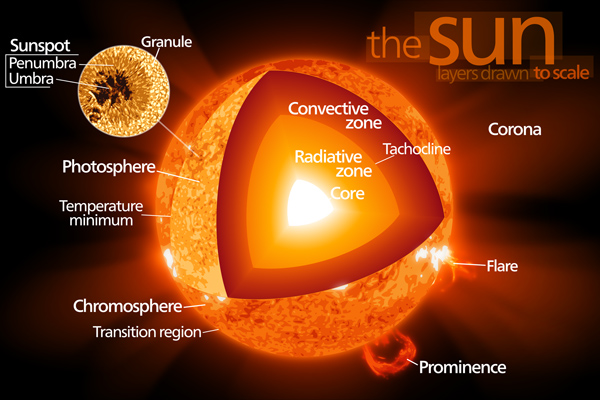 The structure of the Sun / wikipedia.org

The Core — this is where the process of thermonuclear fusion takes place. The core's density is 150 times water's density and reaches temperatures of 15 000 000 °C. The core's rotation is faster than the sun's surface and this gives the sun its gravitational pull.

The Radiative Zone — the area around the core which is the main means of transfer for the energy created in the core through radiation as opposed to convective means. The temperatures drop slightly at this point to about 5 000 000 °C. In the radiative zone, molecules transfer energy as they are excited by the heat and "bumping" into one another.

Tachocline aka Interface Layer — is a thin layer that separates the Radiative Zone and Convective Zone. Through the process of magnetic dynamo, the sun's magnetic field generates in this layer. Studies have shown that while the Convective Zone speeds up its rotation, the Radiative Zone slows down and the Tachocline seems to be the "space" between. This difference in rotation between the two zones creates a magnetic field from the Tachocline and is possibly the cause of the 11-year sunspot cycles and solar flares that occur. Little is known at this time about this part of the sun but studies continue to gain a better understanding of its purpose.

The Convective Zone — this is the outermost ring of the sun where through Convection energy transfers. The process of convection is fairly simple to explain. As the molecules become heated they lose density, moving further apart from one another and rise to the cooler areas, meanwhile, the cooler molecules move into their place and become heated to rise also. Once these molecules rise to cooler areas they begin to cool themselves and become dense again to sink back down towards the source of heat. This process creates a cycle where the heated molecules rise and the cooled molecules fall. Boiling water and ocean currents is a prime example of this.

The atmosphere of the sun is also made of three basic layers.

The atmosphere of the sun / wikipedia.org

The Corona — the hottest (at between 1 to 2 million °C) and furthest point of the sun is the Corona which stretches several million kilometers around the sun and is also visible during solar eclipses. It is the white light that surrounds the moon during the eclipse and is even less dense than the Chromosphere by 0.01%.

Coming to the End

Currently, our sun is estimated to be approximately 4.6 billion years old and what is called a yellow dwarf. We have billions of years to go before the end our sun's life will come around but scientist have speculated as to what will occur when this process happens into three stages.

Stage One — as the sun runs low on fuel it will begin to grow in size and change from a yellow dwarf to a red giant. As it increases in size it will engulf all planets within close orbit (Mercury, Venus, and Earth) to it. 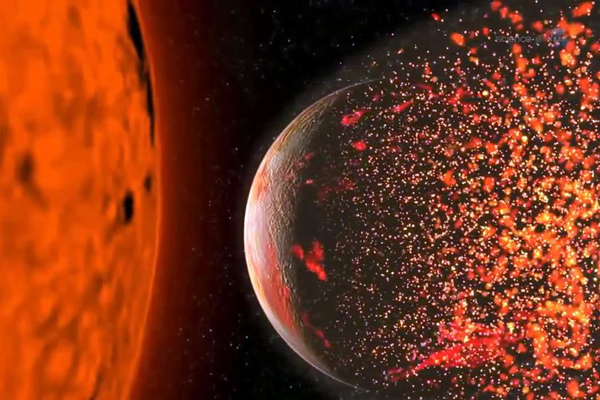 Planet is Getting Fried by a Red Giant Star / dailymotion.com

Stage Two — once the sun has reached its peak size and becomes a red giant, it will then begin to emit particles in burst throughout the solar system which could push other objects and planets out of their orbit creating chaos throughout the system. These particles will then become what is known as a nebula (interstellar cloud of dust, hydrogen, helium and other ionized gasses).

Stage Three — this is when our sun will shrink down into a white dwarf. Basically, it is a cold star unable to support fusion within its core. It will no longer create heat or light and thus, any remaining objects or planets within its orbit will have no ability to sustain life.

There are still many unanswered questions, such as why is the Corona the hottest point when it is so distant, but because of the intense heat we are unable to get close enough to explore and discover the answers to these questions. For now, we rely on spectroscopes and infrared images to tell us the hidden secrets of the sun. Perhaps in the future, we will gain the ability to travel close enough to the sun to get a better view of the solar system's life blood.