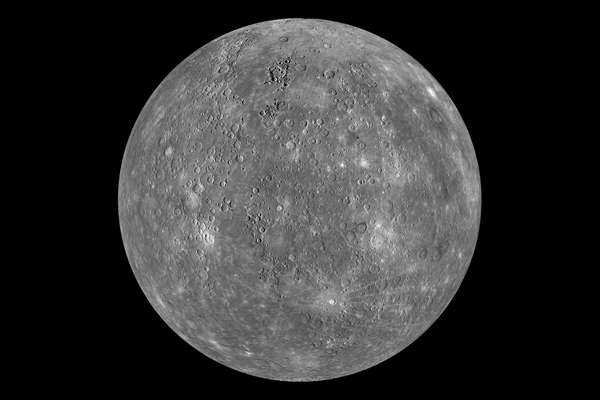 First discovered by the ancient Sumerians during the 2nd millennium BC, Mercury was thought to be the hottest of our planets being so close to the sun. They were able to view the planet from Earth during dusk and twilight hours and gave it the name Nabu, the Babylonian god of wisdom and writing. The Greeks also observed Mercury and assumed that it was two separate planets rather than one and gave the dusk sighting the name Apollo and the twilight sighting as Hermes. It was the Romans that, after realizing it was a single planet, finalized its name as Mercury for the messenger of the gods, little did they know how appropriate the name would fit for this tiny little planet.

Position of Mercury in the Solar System / nasa.gov

Mercury is the closest planet to our sun, sitting roughly at 57.9 million km (36 million miles), and is approximately 77 million km (48 million miles) from Earth. Its nearness to the sun makes it very difficult to study because of the intense gravitational pull of the sun as you near Mercury. As a result, there have only been two probes that have studied the planet, the Mariner and MESSENGER.

Because of its location so close to the sun, the sun's gravity field creates a tidal function on the planet, slowing its rotation on its axis, making its solar days extremely long at about approximately 2 Earth years per 1 Mercurial day. However, it has the fastest orbit around the sun of any other planet at only 88 days for a complete rotation.

Mercury can be best viewed during dusk and twilight hours due to the sun's glare, which hides it most of the time. Another time that is best to view this tiny planet is during its transit when it passes directly in front of the sun. During this time, it is not caught in the sun's glare and can be visibly seen from Earth. Its last transit was in May 2016 and was all over the internet. It's next transit is due to happen on November 11, 2019. 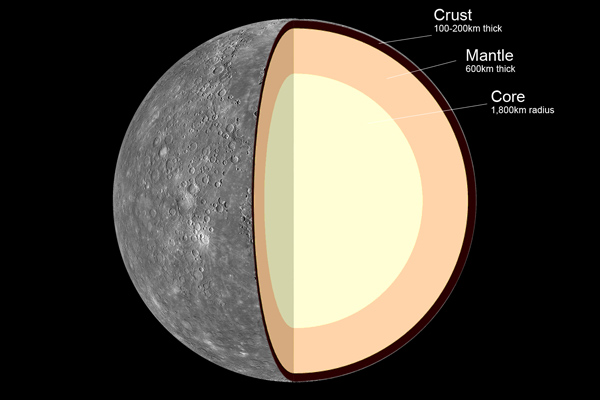 Mercury is the smallest planet in the solar system, 60% smaller than Earth and only 1404 km (872.4 miles) larger than our moon, but it also has the second highest density of 5.43 g/cm3. The Earth's density is higher, but only due to gravitational compression, otherwise, Mercury would be the densest planet. This is due to the fact that its core at an approximate radius of 1800 to 1900 km, which takes up 42% of its mass, contains high concentrations of iron.

Its gravitational field is very weak to the point of almost undetectable as a result of its large iron core and thin crust. There are no means for conduction to occur so the ability to create a magnetic field is nonexistent. It is also the reason for the low gravity on the planet's surface. If you were to weight 68 kg (150 lbs) on Earth, your weight on Mercury would only be 26 kg (57 lbs), the gravitational pull of the planet being so much weaker than Earths. This is the reason for the lack of atmosphere to protect the planet, so it is marred extensively. 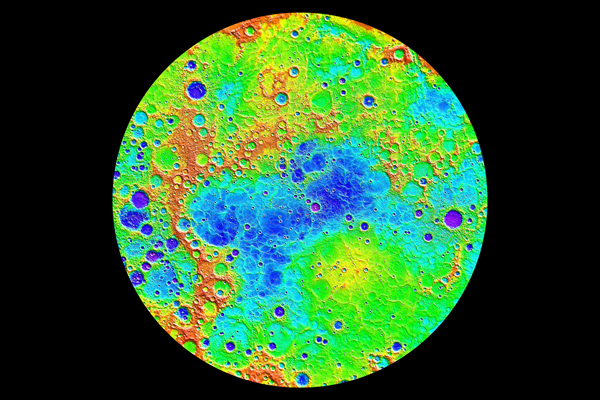 Mercury is essentially a dead planet, possibly since shortly after it was formed, with no color variation or geological activity occurring on the surface. Its surface is littered with extreme amounts of impact zones from meteors similar to our own moon. Mercury basically has no atmosphere which would typically burn away most of the debris before making landfall onto the surface. Most of these craters are very old from the first stages and second stages of the solar systems beginning when Mercury was fairly young.

During observations of Mercury, it has been discovered that in the craters located in its poles there is evidence of frozen water. This is probably due to the fact that its rotation on its axis, which is completely vertical keeps its polar regions in constant shadow and with no atmosphere to retain heat, they remain cold. It is believed that the water may have been brought to the planet via a comet that impacted onto the surface billions of years ago. 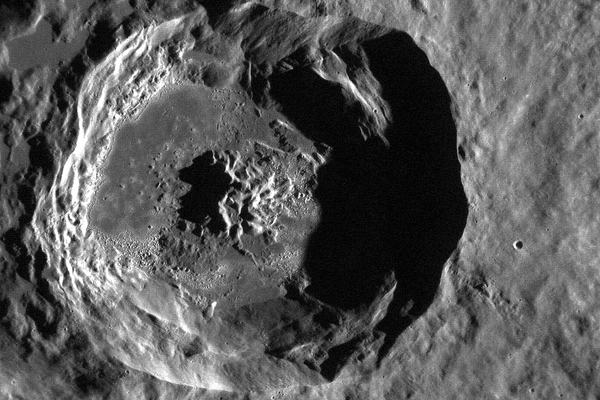 Mercury has an unusual terrain that may have come as a result of a very large impact from a meteor believed to be approximately 97 km (60 miles) in size. A 1300-km (800-mile) crater named the Caloris Basin suggest that upon impact, the force sent a shockwave towards the opposite side of the planet. This caused for the strange chaotic mixture of hills and fractures on the opposite side of the impact zone. However, not all of Mercury's craters were created by meteor impacts.

It is speculated that during the early stages of Mercury's development, there consisted volcanoes on its surface. These volcanoes, during an eruption, may have created some of the craters that are visible today. Unlike the volcanoes on Earth, however, during the eruption, because of the lack of atmosphere, all the elements of the volcano would have escaped into space leaving little evidence on the surface of is existence. With time the volcanic "mounds" would have been scoured away by cosmic winds and bombardments from various debris, erasing them completely from the surface. 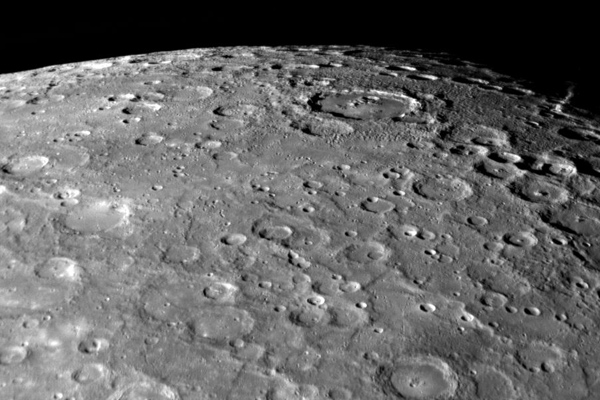 Because it is, in all respects, a dead planet, there is no climate or atmosphere that is detectable. With a lack of an atmosphere, bombardment from space debris such as asteroids is very evident on its surface. Temperatures on the surface can range from 427°C (801°F) during daylight and -173°C (-279°F) during the night, because it has no protection from the solar rays that engulf the planet on a regular basis. 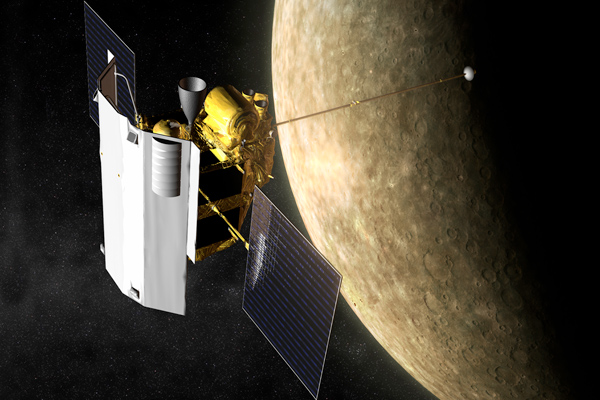 Because of its location, the hope of gaining information on this mysterious planet was not very good. The sun's gravitational pull is so powerful when nearing Mercury, it would take the same amount of fuel for a spacecraft to observe Mercury as it would for a probe to travel to the edge of the solar system. So only two missions were ever sent to Mercury. The first in 1974 was the American probe Mariner 10 which took images of the surface of the planet as well as investigated its environment, however, the imaging equipment was not very good and only 1/3 of the planet was able to be observed.

The second probe was launched in 2008 by NASA, MESSENGER, made three flybys of Mercury and sent back images of the planet's surface that had never before been seen and giving us a complete mapping of the surface of Mercury. This same probe, in 2011, settled itself into a permanent orbit with Mercury but exhausted its fuel on April 30, 2015, and crashed into the surface. However, we obtain a vast amount of information before its demise and now have a much better understanding of this amazing planet.

There have been several projects proposed for further exploration of Mercury, but because of the expense, none have yet to be approved. Perhaps in the future we will find a way to build a rover that can withstand the hostile environment.