So much controversy surrounds this enigma, for most it is a planet. But within the astronomical community, it is considered a dwarf planet due to the new classification criteria set by the International Astronomical Union (IAU) in 2006. It shares its neighborhood with several other Kuiper objects such as Makemake, Eris, and Haumea. However, whatever category this tiny little planet falls under it is a mystery worth solving.

Founded in 1930 by 24-year-old Clyde Tombaugh with a homemade telescope, it was the first planetary object to be discovered past Neptune within the Kuiper belt. It was originally thought to be the fabled "Planet X" or the Ninth Planet in our solar system, but its size and distance did not fit with the specifications that Planet X was supposed to have.

Over time, there were many speculations as to the structure of this planet, from a hunk of scared up solid rock to a large block of ice, and has been a subject of argument among scientist in the world of astronomy. It was not until 2015, during a flyby mission that the New Horizons probe was able to send back even more detailed information showing a very mysterious icy world. Astronomers were baffled and intrigued because it was nothing like what they assumed it would be. 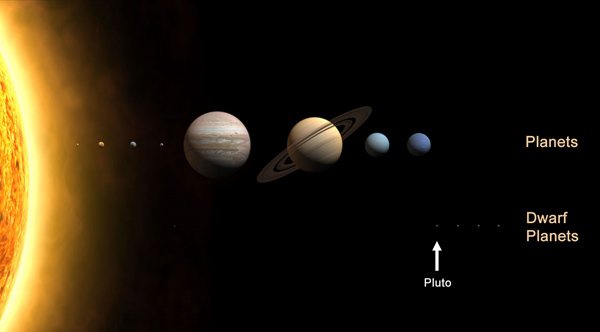 Position of Pluto in the Solar System / nasa.gov

Pluto follows a very high elliptical orbit around the sun at an average distance of 3.67 billion miles or at Perihelion 4.44 billion km (27.6 billion miles) and at aphelion 7.38 billion km (45.8 billion miles). Because of its distance, temperatures on the planet remain below freezing with an average of 44°K (-229°C or -380°F). During its perihelion, Pluto acts much like a comet in that the heat from the sun turns its solid icy surface into a gas and rises giving it a temporary atmosphere. However, as it moves away, these gasses become solid again and fall back to the surface. Its rotation period around the sun takes approximately 248 years to complete, so this is only viewed once a generation on Earth.

However, it is not always the furthest planet from the sun. It's strange orbit also causes for it to cross orbits with Neptune. Because of this from 1979 to 1999, Neptune became the furthest planet from the sun rather than Pluto. This occurs every 248 years at 20 years stretches. It also takes about 6.4 Earth days for it to complete a full rotation on its 122.53 axial tilt. One oddity that had scientist scratching their heads is Pluto orbits within it's on orbit. Basically, it rotates on its axis as it rotates in a small tight circle around in its orbit around the sun while its satellites and moons orbit it. No other planet appears to have this feature that is known and it is unknown would have caused this strange behavior. 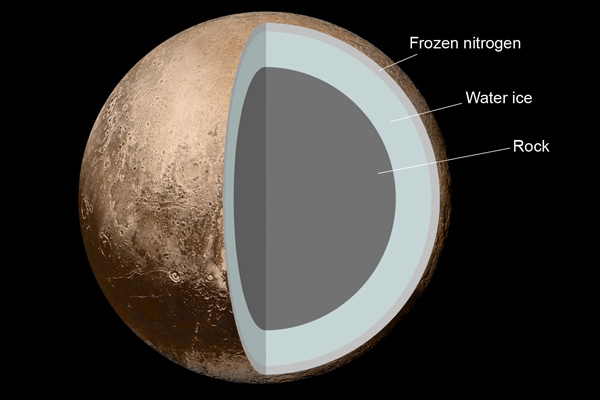 It is not clear as to the internal structure of Puto, but it is strongly believed that Pluto's core is a solid rocky core surrounded by a water ice mantle and topped with frozen nitrogen. Much more analysis of Pluto would need to occur in order to determine its core. 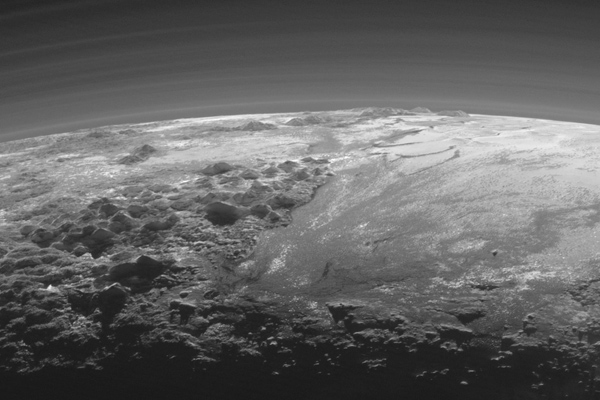 What was assumed to be a frozen tundra with little or no geological markings of interest, turned out to be far from the truth. Decorated with a few impact sites, the surface of Pluto proved to be much more intriguing. Most notable sites are the Tombaugh Regio, Cthulhu Regio, and the Brass Knuckles. Pluto's surface pressure was measured by the New Horizon's probe at approximately 10 microbars which is 100,000 times less than Earth's which is at 1 bar at sea level.

Pluto's surface consist primarily of frozen nitrogen with traces of methane and carbon monoxide and is approximate 2,374 kilometers (1,475 miles) in diameter. This is much larger than was originally thought by scientist. It is also one of the most contrast bodies in the solar system next to Saturn's Iapetus. With varying colors from charcoal black, dark orange, and white. There is strong belief based on the lack of craters on its surface that the surface is less than 10 million years old which makes the planet still fairly young compared to other planets in our solar system. There is also strong belief that because of its geological landforms, there may possibly be glaciological, cryovolcanic, and tectonic activity on the planet still occurring. 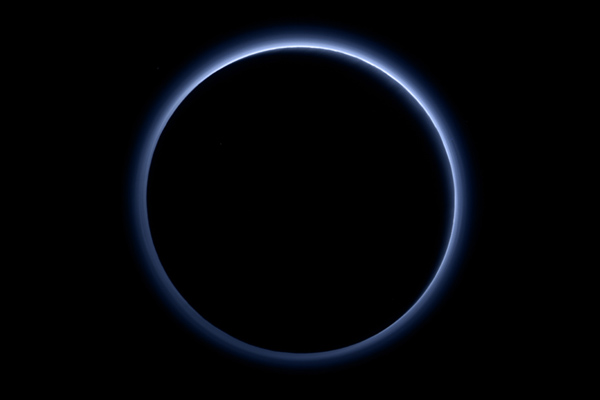 Because of its distance, there is no atmosphere on Pluto except when nearing the sun during its perihelion. It receives no heat from the sun while in its aphelion and so surface temperatures are well below freezing keeping it a solid frozen rock. Pluto's gravity is much less than Earth's, a 68 kg (150 lb) person on Earth would only weight 41 kg (90 lbs) which makes its atmosphere extend much higher than Earth's.

Pluto has little to no magnetic field due to its slow rotation, however, one interesting element of Pluto's atmosphere though is, like Earth, it has a tropospheric boundary. This is the layer where all weather patterns occur and is not a common layer on all planets. It is unknown if the planet has an actual "climate" but the presence of an atmosphere and the geological indicators point to the idea that there be one.

Pluto has a total of 5 known moons, Charon (closest and largest of its moons), Styx, Nix, Kerberos, and Hydra. These 5 moons orbit Pluto in a circle. For more information on Pluto's moons check out Pluto's Satellites and Moons page.

On January 19, 2006, the Lockheed Martin Atlas V was launched from Cape Canaveral Air Force Station, Florida carrying the New Horizon's space probe. Its mission was to observe and document information to send back to Earth on Pluto and its moons. It arrived at its destination on July 14, 2015, and has mapped half of the planet's surface and collected data on its geological formation, chemical compositions, and sent back images of both Pluto and its moons.