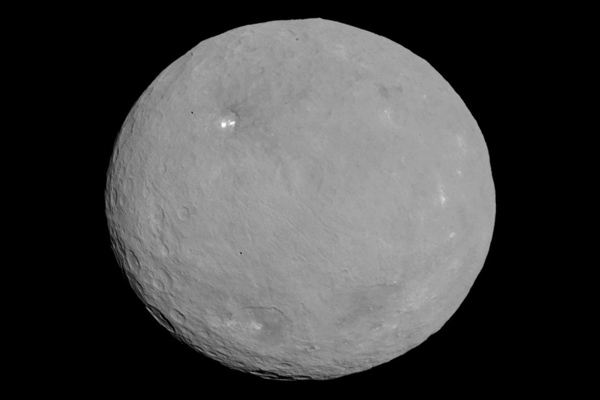 Known as both a dwarf planet and the largest asteroid in the asteroid belt, Ceres is the only dwarf planet that is neither located in the Kuiper Belt, considered a Trans-Neptunian object, nor a plutoid. It, in fact, resides within the asteroid belt that lays between Jupiter and Mars. It is strongly believed that Ceres was prevented from becoming a fully developed planet due to the tidal forces from the powerful magnetic field of Jupiter.

Scientist believe that aside from its low gravity and thin atmosphere, it may be possible to place a mining colony on the surface of this planet in the future for exploration of beyond Jupiter objects and mining of the asteroids within the belt. Some have even speculated that Ceres may contain many answers to questions on the beginning of our solar system as it has similar characteristics for both an asteroid and a comet. Whatever the case may be, there are many aspects of this tiny world that make it interesting within itself.

Ceres was the first object discovered in the asteroid belt in 1801 by Father Giuseppe Piazzi. First classified as a planet, after the discovery of other objects in the vicinity, it was listed as the largest asteroid in the belt. In 2006, after the IAU (International Astronomical Union) created the new category of Dwarf Planet to the planetary classification criteria, Ceres was promoted to being a dwarf planet but still remains identified as the largest asteroid in the belt. 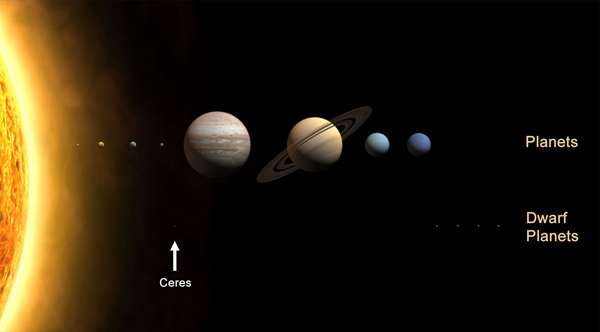 Position of Ceres in the Solar System / nasa.gov

Ceres is located approximately 414 million km (257 million miles) from the sun and takes about 4.6 years to complete its orbit around at a 10.593° elliptical rotation. Its day equals approximately 9 hours for it to rotate on its 3° axial tilt.

It is believed that Ceres core contains silicate rock surrounded by a 100 km (62.13 miles) think mantle containing 200 million cubic kilometers of water. That is more fresh water than is contained on the entire Earth combined. This is topped by a thin dusty outer crust. 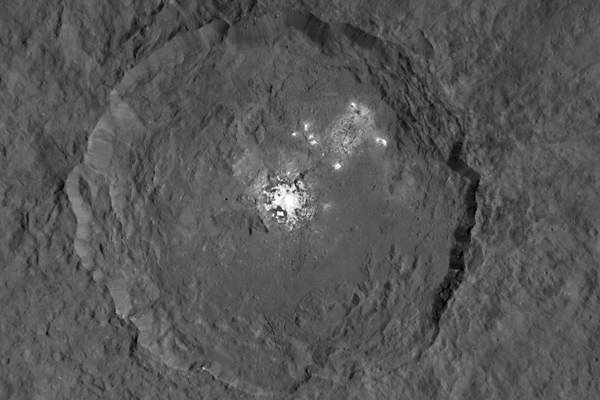 Ceres takes up approximately 1/3rd the mass of the entire asteroid belt but is the smallest of the dwarf planets in our solar system. The 945 km (587.2 mile) diameter surface of the planet is riddled with impact craters giving it a "lumpy" look. One notable crater on the surface is the Occator Crater. In February 2015, the Dawn space probe sent back images of Ceres with some astounding and puzzling discoveries. Within the Occator Crater, there were two bright spots that appeared as if they were lights.

Over the course of the past year, Scientist have speculated as to what these bright lights were. The lights even appeared to brighten and dim periodically. There also appears to be a large cone-shaped mountain on the surface where the first initial bright lights were discovered. These two discovery's spurred on a host of conspiracy theories on the existence of aliens on Ceres. However, research has proven that these are in fact from natural occurrences and not from alien civilizations. Finally, different colored filters were used to observe Ceres and it was discovered that there were in fact 130 bright spots in varying degrees throughout the entire planet. Most of these lights are found in the bottom of equators and are speculated to contain hydrated magnesium sulfates, aka Epsom salt. 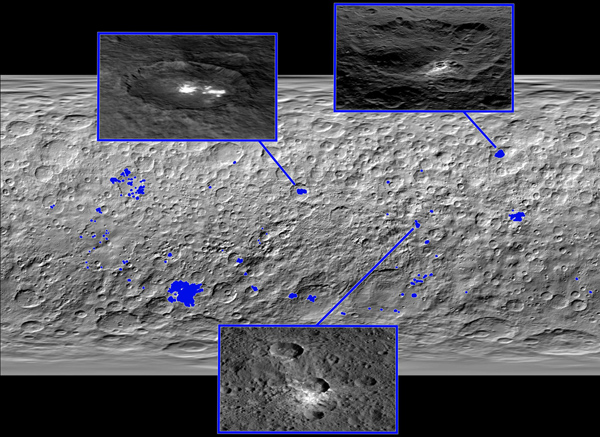 This discovery was made by the Max Planck Institute for Solar System Research team in Goettingen lead by Andreas Nathues and leads them to believe that Ceres may be a cross between an asteroid and a comet. The discovery also gave more credence to earlier speculations that there is water ice beneath the surface of the planet.

With the planet having such a high amount of subsurface water, there is a belief that Ceres may be habitable. This would pose a wondrous idea for the future in mining the surrounding asteroids within the belt for minerals and other resources. The water that is on Ceres can also be mined for creating both oxygen and rocket fuel. However, long-term exposure to Ceres low gravity of 0.028 compared to Earth's 1.0 has yet to be experimented on and it is unknown what the effects on the human body would be. 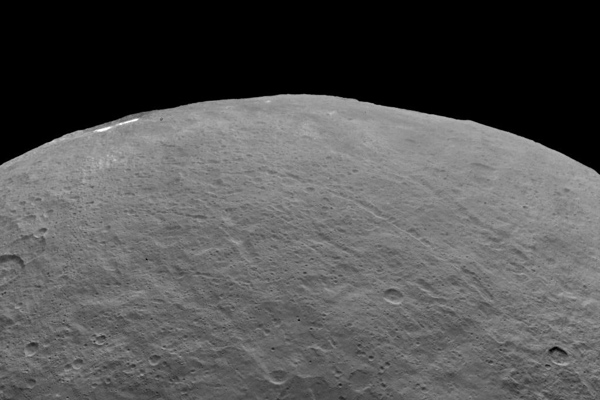 There is little to no atmosphere on Ceres though small amounts of water vapor have been detected in the polar regions of the planet. It was almost missed as these "escapes" were small and slow so they were not detected at first. There is no climate that can be detected on the surface so if standing on Ceres surface you would not experience any wind or "rain". All that you would experience is extremely cold as the planets temperatures averaging -73°C (-100°F) during the day, and -143°C (-225°F) at night. Not as cold as its more distant dwarf cousins but cold enough to be very uncomfortable and keep the planet's subsurface water from "thawing" too quickly.

Although Ceres is surrounded by asteroids, each asteroid is approximately 1 million miles apart from one another and none appears to be orbiting Ceres. So at this current time, there does not appear to be any moons that orbit Ceres. 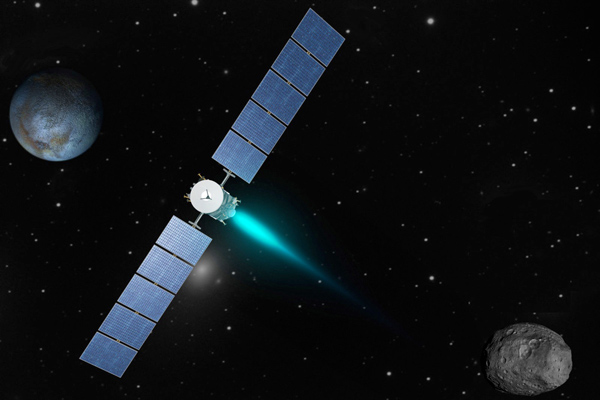 On the Way to Ceres (Artist Concept) / nasa.gov

To date, only one mission has ever been made to Ceres, the Dawn probe launched from Cape Canaveral by NASA in 2007. The Dawn probe, after visiting the Vesta protoplanet in 2011 and 2012, approached Ceres at the beginning of 2015 and is currently still orbiting the planet. Large volumes of information have been obtained by the probe and sent back to Earth, including the bright light images that confused Scientist at first. There is no information as to whether Dawn will leave Ceres orbit or if any future exploration of the planet aside from Dawn is planned or not.